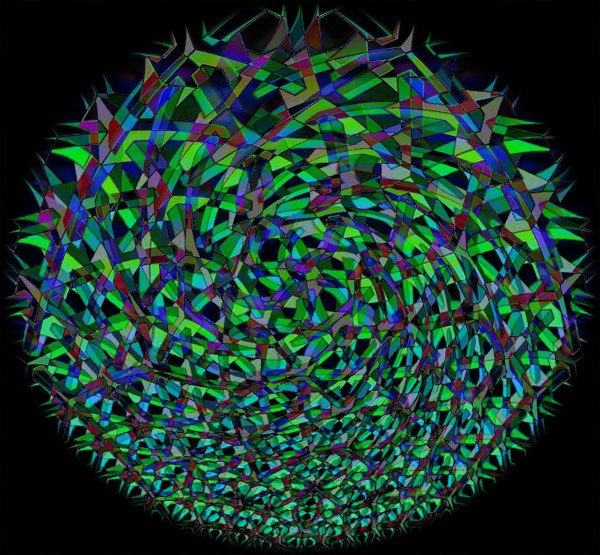 Zack: Meanwhile, down in the basement, Gruber is going to try to distract Betty by handing her the case and then grabbing her gun. What's her dex?

Zack: He tries to sort of throw the case to her while reaching for her gun. What is she going to do?

Zack: He tosses her the case. She catches it with one arm and as his hand touches the gun she pulls the trigger. Full auto bullets rip into his arm and the gun flies out of her hand. It lands at his feet.

Steve: Running with the crystals!

Zack: The only way to run back towards that spherical room where the colored lights appeared.

Steve: But they're shut off now, right?

Steve: Booking it with the crystals for the sphere room. If I can get inside I am closing the vault and turning the machine back on.

Steve: Totally boxed in dude. Time to play the wildcard.

Zack: That's not a wildcard. That is probably going to turn you into a maniac.

Steve: Doing it! Punch it!

Zack: Fine. Betty runs into the room, closing the vault door and activating the platform with one of the crystals. Impossible patterns of color and light appear to distort the walls of reality. She perceives infinite time and space and the passage of dimension unknowable to the human mind all converging into a single geometry.

Steve: Does she gain Cthulhu Mythos?

Zack: She gains 100% Cthulhu Mythos. She also becomes very strong and very difficult to kill, doesn't feel pain, and views every person as a little button she can push with her finger meaning a skull she smashes with her bloody fists.

Steve: So what is it?

Steve: Well, at least they didn't get their crystals.

Zack: Nope and eventually most of the mountain top is going to get sucked through Daoloth into another dimension and spit out like mulch out of a chipper shredder.

Steve: Will it be a good dimension?

Zack: You're really reaching for a happy ending out of this mess? There are no good dimensions in Call of Cthulhu. They all suck.

Steve: Did Walt survive at least?

Zack: Suuuuuuure. Driven off in a truck by the Nazi secret occult society that was communicating with a maddening god. He'll be fine.

Steve: Well thanks a lot for bumming me out, dude. This is going to ruin my whole day.

Zack: Forget about it, Steve. It's Cthulhutown.