HEY I ALSO DO PRANK CALLS TO FAMOUS POLITICIANS

What the hell is up, Internet dudes and especially all you hot chicks reading this and drooling over me. Please keep sending the titty pictures. It'll never get old.

So I am watching the news today and what do I see but a certain governor dude in wisconsin who is getting into it with unions or whatever gets prank called by a dude called david cocks which right there should be your first tipoff. What sort of amateur prank caller uses a totally unbelievable fake name like that? Bodie used to call himself Boners Spoogington and people could not hang up the phone fast enough. I went by the nickname the Wasilla Wolf and I used to record these prank calls for my website www.wasillawolf.biz which I think is now owned by a place in China that sells poison diapers for dogs.

In case yall don't remember I have been doing this prank call business forever and lately been doing prank calls on Papa John's in Wasilla pretending to be Todd Palin and ordering up a bunch of weird pizzas at weird hours like calling the night before and asking for six triple olive and black pepper pizzas to be delivered at dawn. For some reason Todd ALWAYS takes delivery of the pizzas too, no matter what I send or what time it arrives.

Since these prank call things are a big deal right now and everbody is getting in the news to jump start their career I better release some old transcripts. I tape all my prank calls, but because of laws in Alaska started by Mrs. Palin you get chemically castrated if you release any tapes or emails about the Palins. All of my tapes are about the Palins. Lucky for me you can get around the law with a transcript and Tucker has a speech thing on his computer that we just play the tapes into a microphone and it puts them into a script. If there are typos or anything blame his gay computer.

I figure I'll start with a recent call of mine. I call it the hot tub pizza party. It stars the Papa John's lady in Wasilla and me as that lactonic motherfucker himself, Todd Palin. 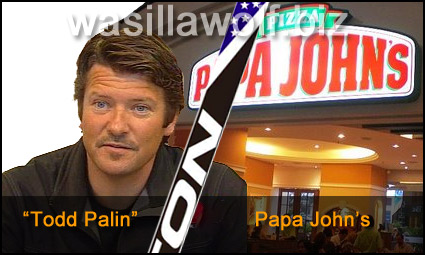 <Papa John's> Papa John's Pizza, home of the seventh cheese, how can I help you?

<Papa John's> What can I get for you?

<Todd Palin> I'm having a hot tub party with tons of dudes. What sort of pizza would a bunch of super hungry dudes like?

<Papa John's> We have The Meats pizza.

<Todd Palin> That's perfect. What meat is on that?

<Todd Palin> That sounds like the sort of thing I want to put into my body. If I answer the door wearing a ski mask and my tiny baby dingus is hanging out like a mushroom cap is the driver going to freak out?

<Todd Palin> You know what? Forget that, just bring them around back to the hot tub. We have an inflatable alligator you can put them on and float them out to us.

<Todd Palin> As many as you can make and get 'em here in an hour. Maximum number.

That's just one of the many Papa John's prank calls. They're all pretty much like that. But I had some real classics going before. See, my thing is that I wait for some big story and then I work the phones to insert myself into the story. To real dig up the juicy stuff.