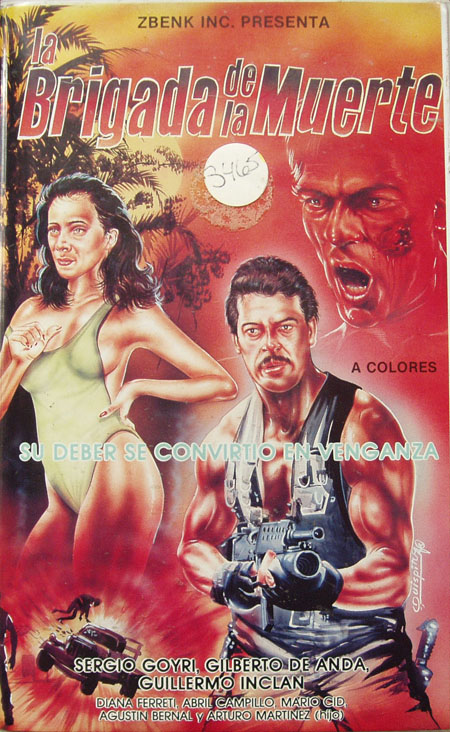 Dr. Thorpe:I think the artist accidentally drew the guy's face too far to the left so he said "oh, screw it, I'll just use that as the woman's face and draw the dude over here..."

Zack:I could pretend to make some comment about the guy posing exactly like Schwarzenegger on the cover of Predator or the guy in the background having a huge cyst on his face, but really...

Dr. Thorpe:Yeah, we both know where the real action is on this one.

Zack:Keep in mind that the cover is a fucking advertisement for the video contained in the box. The only people renting or buying this movie are serious deviants. An advertising company could place posters of this up at bus stops and people would bring other posters from home to cover them. They would come back the next day and there would be posters of women in lingerie and rap stars.

Dr. Thorpe:The only excuse for this is if the woman with the face of a man is somehow integral to the plot.

Zack:Yeah, but I mean, Jesus Christ can't they come up with some real woman without a man's face to be on the cover?

Dr. Thorpe:Hernando Muerte is on a desperate mission to find the madman who stole his wife's face and replaced it with his own.

Dr. Thorpe:If it's the Vagina Monologues, that would explain why Charlton Heston is so angry at it. He's way too conservative to tolerate that. He got so upset about the frank discussion of feminine anatomy that he broke out in hideous boils.

Zack:GET YOUR POX OFF OF ME YOU DAMN DIRTY LIBERALS!

Zack:Wait, Sergio Goyri was the Sausage Man! This is the Implacable Sausage Man 2: Deceptive Heat or something.

Zack:It's going to work in reverse to Stephen Rea though. Sausage Man is going to gradually work his way up "her" body and then get to the face and throw up, only he'll throw up 40mm grenades and the world will dissolve into explosions.

Zack:If only Sausage Man had a bladed metal glove to exact his revenge on the transsexuals. He might actually be placable.

Dr. Thorpe:I think the picture of his face on this cover represents the exact moment when his lover is unmasked and we hear that little descending "boner dying" slide-whistle.

Zack:"Que?" Thwwooomp........BOOOM! God I wish I was the guy dying in that fucking buggy thing.

Zack:You know he wouldn't kill her. He would just make her somehow even uglier and she would return with a metal samurai mask and a perpetually bleeding head wound.

Dr. Thorpe:Yeah, and on the cover of the sequel she'd be sitting on top of a huge glass pyramid filled with corpses and he'd be grimacing and climbing up it with one arm chopped off at the elbow.

Zack:And she'd be up there just grinning, with the left side of her violated and abandoned body melting into the pyramid.

Dr. Thorpe:And there would be a bunch of guys in greasy coveralls holding wrenches chasing towel-clad women around the base of the pyramid.

Zack:Maybe the whole pyramid could be made out of dead Jews and Hitler could be standing there and one of the Jews could be a really hot woman and Hitler's eyes could be bugging out and his tongue rolling out of his mouth to touch the ground.

Dr. Thorpe:That's it, I quit. Mexican comedies can get away with that kind of irreverence, but coming from you it's nothing but disgusting.