Zack: The well of bad retro fashion is nigh inexhaustible, or at least that's our hope as we create this fifth installment of Retro SWAT. You thought the 60s and 70s were just hippies and disco, but the truth is oh so much more horrible.

Dr. Thorpe: I sure hope everyone isn't sick of us making fun of people's stupid old clothes. They shouldn't be, because there's still plenty of ridiculous old fashion to be made fun of, and there's also plenty of room to educate readers. Consider this edition of Fashion SWAT a public service announcement about the joy of being different.

Zack:Special thanks are offered on this one to top bloke NoneMoreNegative for supplying us with the pictures, though we give proof to the lie of his name in this very article. 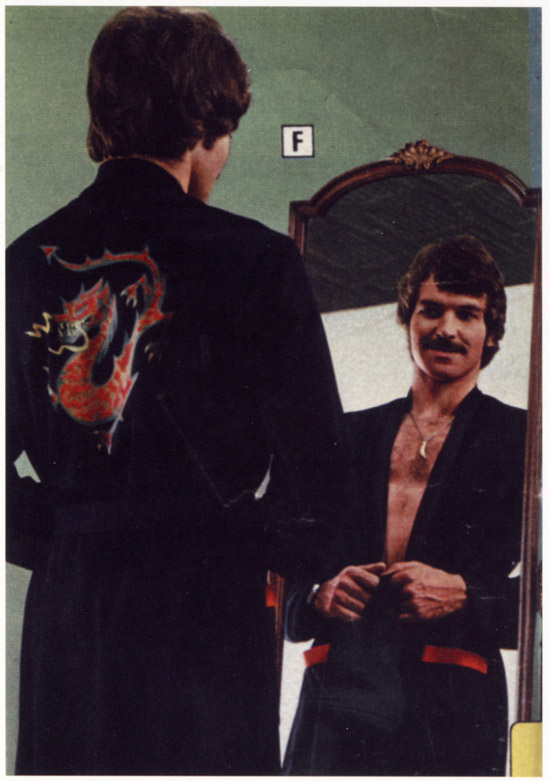 Dr. Thorpe: Burt Reynolds heads off for a day at the dojo.

Zack: This guy is going to get his ass kicked by Bruce Lee. I can smell it like his Aqua Velva.

Dr. Thorpe: I think he must have been the original leader of the "evil" dojo in Karate Kid. What the heck was with that place, anyway? That was some seriously unscrupulous karate, I'm surprised parents would send their kids to that.

Zack: That place got them started down the path to slightly evil at a young age.

Dr. Thorpe: "NO MERCY, SIR!" That's a good message for the kids.

Zack: Yeah, they say "no mercy," but I bet if they win at the competition there's a pizza party afterwards. It wasn't really so much teaching them evil as just teaching them to be really big assholes.

Dr. Thorpe: No matter what kind of sports movie it is, there's always the asshole team. I bet there was an asshole bobsled team in "Cool Runnings."

Zack: It was probably the Eskimo team. Fucking 'kimos.

Dr. Thorpe: I bet there was an asshole team of huskies in Snow Dogs, too.

Zack: Again, the Eskimos are a common foil for the heroic underdogs.

Zack: I'm pretty sure the evil team in Bad News Bears was entirely Eskimo as well. They are just powerful athletes with an arrogantly superior demeanor and it makes it easy to cast them as the villains.

Zack: Yeah, really, they're taking over our proud white sporting traditions with their seal skins and 100 words for snow bullshit.

Dr. Thorpe: It's kind of poor timing that the era of chest hair was concurrent with the era of chains and pendants. I bet his chest fur was always getting caught in his pendant chain. He's all satisfied looking in this picture because he finally picked the last little pube out of his pendant and he's ready to roll.

Zack: That necklace is probably his one weakspot. Like a boss in House of the Dead or Gradius or something. When the dragon tooth blinks Bruce Lee will grab it and twist it up in his pec carpet. Then Bruce Lee will just stand there doing that cool shaking with rage and howling thing he does whenever he just emasculated some villain.

Dr. Thorpe: I think you forgot the part where it looks like Bruce Lee might not win, and this guy slaps him in the face like a bitch and looks all smug and then Bruce Lee touches his mouth and there's a little bit of blood coming out, and he puts his finger in the blood and tastes it and then gives Burt Reynolds that "oh, you really did it this time, pal" look.

Zack: Oh yeah, Bruce Lee definitely derived all of his power from split lips. During winter time he'd get cracked lips and he'd just fucking punch cars in half and kick over billboards. The studio had to hire someone to just follow him around with lip balm to forestall any dangerous incidents on the set.

Dr. Thorpe: God, I'm sick of looking at this guy, and I keep thinking "well, at least I get to see Bruce Lee beat him up in a minute," but then I realize that I actually don't.

Zack: You really just have to accept the fact that justice will only be meted out by the grim avenger of your imagination. I sort of like to visualize Ghost Rider killing him, because honestly not even Bruce Lee can live up to a ghost, with a skull for a head, riding a motorcycle and the frigging skull is on fire. I mean, come on!

Dr. Thorpe: How about Ghost Rider in a dress, because that adds an element of comedy in there too, and that's what we're all about.

Zack: Ha ha, Ghost Rider in a dress. Will his antics never cease?