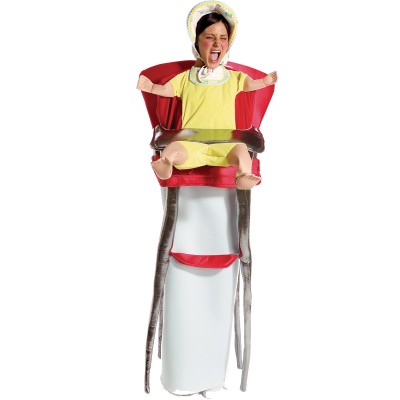 An unbelievably clever and fabulous costume! A BuyCostumes.com favorite!!!

You just won't believe how great this one is until you see it in action. Step into it and slide your arms into the legs and you'll leave everyone kicking and screaming with delight! Polyester laminated onto foam creates a very durable costume you can use year after year. Available in adult size Large.

Zackula: I want to pee on her.

Dr. Thorpenstein: Seriously though, if a really attractive girl were wearing that costume, it would be really tough to figure out where the boundaries were.

Zackula: He would yell, "Say goo, you filthy little bitch! I am going to pee-fuck your head-cunt until you puke-fart!"

Zackula: For some reason I've been thinking a lot about moral hazard lately. I don't know, I think it applies here.

Dr. Thorpenstein: I think the line between this and obscenity is if they make a version where it's a potty chair.

Dr. Thorpenstein: No, I guess that just adds context for the pee, so maybe it's less obscene, artistically speaking. I dunno, man, we're in a real grey area here.

Dr. Thorpenstein: I'm sure you know that the satisfaction of peeing on anyone-- especially a baby-- is multiplied by the number of feet of height from which you pee on them. So peeing on this weird adult baby from a jet, yow, that's some real action.

Zackula: And there's no way the constitution talks about jets. That thing is like 100 years old.

Dr. Thorpenstein: Maybe it's got some shit like "Ifsoever man flieth upon a bird of science, then I, God, do permit this man to pee upon the babies of the field."

Zackula: "For he who casteth his body into the air shall know the glory and the reward of castething his golden rain back down upon the sunward faces of cherubs in their feeding yokes."

Dr. Thorpenstein: "And here be the first fucking amendment, bitches: hesoever who doth not drinketh the worm is a pussy."