Zack: Fashion SWAT returns with twelve malformed miscreants from Hel-Looks, a people-watching website that snaps photos of the fashionistas of Helsinki, Finland. The urban hipsters of northern Europe have slightly unconventional fashion sense.

Dr. Thorpe: Hel-Looks: A perfect name, if only it had an extra L. From what I can tell, this site is either a street fashion showcase or a disturbing anthropological study of what happens when Eurotrash collides messily with irony and 80s futurism. Be warned: this is perhaps the most aesthetically disturbing edition of Fashion SWAT since Ganguro Madness.

Zack: Hel-Looks is easily the most requested topic for a Fashion SWAT, so remember as your tour through Helsinki progresses: you asked for it! 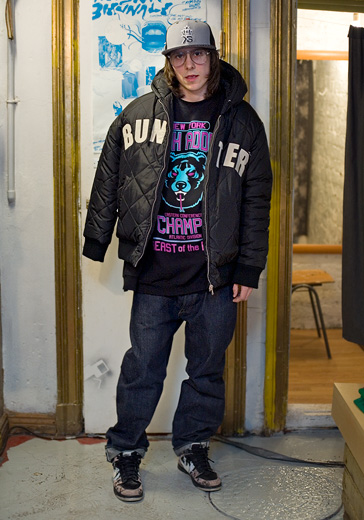 "My style is Japan-New York crossover. I'm wearing a King Stampede cap, Sugar Cane jeans, a Bounty Hunter jacket, a Mishka shirt and Cazal eyewear. The U.N.K.L.E. Dunk sneakers I bought from a Chinese friend of mine.

My style role model is Mars Blackmon who endorsed Nike Jordan back in the 80's. Bisquit Stash is the best shop in Helsinki."

Zack: His style role model is Mars Blackmon and he sounds pretty trustworthy.

Dr. Thorpe: Irony just raped itself and gave birth to this.

Zack: Why do I get the feeling this guy should be wearing a custom trucker hat with an ironic catchphrase printed on it?

Dr. Thorpe: No, see, things that are meant to be ironic aren't ironic enough for this guy. He demands sincerity in his irony, and will only accept things that are entirely sincere, otherwise he's not the source of the irony.

Zack: Good point, but he still looks like Judah Friedlander caught a tapeworm.

Dr. Thorpe: This is the exact point at which being hip and being an autistic 4th grader from 1988 intersect.

Zack: "Yo, my style role model is Moms Blackmom! She dress my shit TIGHT."

Zack: "Here you go Anttoni, your hat says 'handsome' in Chinese because you are sooo handsome."

Dr. Thorpe: This dude lost his arm in a hoverboard accident in the 1989 conception of 2015.

Zack: The name of every designer he mentions sounds like a boss from a videogame. King Stampede is pretty easy, you just throw the the boomerang at his head when it flashes and jump over his charges. Sugar Cane is impossible though.

Dr. Thorpe: Nah, he's easy. Just hold up a mirror and he shrieks and dissolves.

Zack: Yeah, but he keeps spawning minions that try to up-sell you with belts and 28 dollar shoelaces.

Dr. Thorpe: You know what this reminds me of? Twelve-tone music. To those trained in music theory it kind of maybe sounds like something if they squint really hard, but for everyone else it's indistinguishable from random noise. This guy probably thinks his $100 Mishka shirt is pulling off some awesome look, but to most of us he is indistinguishable from a guy who just spent $7 at the worst thrift store in the world.

Dr. Thorpe: This guy is the Schoenberg of style, which sounds artsy but I'm actually just calling him worthless.