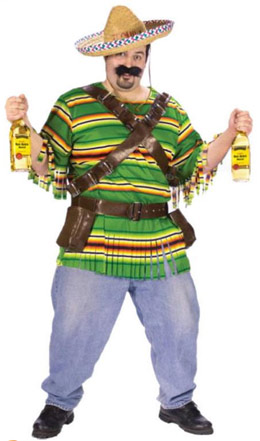 This is one partying dude!

Pants and shoes not included.

Dr. Thorpenstein: Hmm, yeah, this is pretty racist I guess, but I'm still holding out for a really good coon costume.

Zackula: This is what happens when white people rule the world for too long.

Dr. Thorpenstein: Couldn't they have given him some tacos in the holsters or something? I'm sorry, but they really aren't selling this concept hard enough.

Zackula: "Yeah, I'm a giant fat dude, but they make costumes so even I can dress up as a racist stereotype."

Zackula: In 50 years when most Americans are completely immobile mounds of flesh on couches being bathed and turned by nurses they will still be ordering pancho-patterned blankets and sombrero pillows and mustaches to mock the Mexicans.

Zackula: There will still be some guy on a holographic webcam somewhere, the gelatinous mountain of his body quaking with mirth as he brushes Soft Batch cookie crumbs from his fake Mexican mustache.

Dr. Thorpenstein: This is one of those things where you either have to do a careful mental census of whether there are going to be any Hispanic people at the party that you might offend or just be too stupid and racist to care. And I'm not holding out much hope that the first group exists.

Zackula: It reminds me of about a year ago when Homeland Security had a Halloween party and a white guy went dressed as a prisoner in blackface. Literally blackface. And the best part is he appeared in blackface posing with high ranking officials for pictures at the party and I think he won the costume contest.

Dr. Thorpenstein: I'd be inclined to admire the hubris of that if it weren't so representative of everyhing this country has come to stand for. Nah, what the hell, I'm just going to admire it.

Zackula: I think it's more that these people sometimes just forget what time we live in. When you're shut up in a room with Strom Thurmond it's only natural you start patting him on the back and talking about what a great idea it was to think black people shouldn't be able to eat pizza with white people or high five them or whatever segregation was about. It's just one of many reasons for us to think we're living in the 1930s.

Dr. Thorpenstein: In every American, no matter how liberal they are on the surface, there is a small part that just goes, "FUCK YEAH, I'M PANCHO VILL-AH, WHO THE FUCK WANTS SOME TEH-KWILL-AH?"