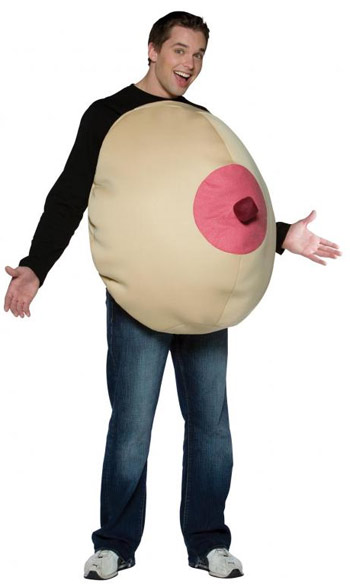 Add your own pants, shirt, and shoes to complete this costume.

Dr. Thorpenstein: I think the guy in the photo is carrying this off with pretty much the only possible attitude for this costume. "Hey, whatever, I'm a huge boob, I don't give a shit."

Zackula: It reminds me of Blue Velvet, when he finds that ear and takes it to the cop and the cop looks it over carefully and then says, "Yep, that's a human ear alright."

Zackula: It would be pretty creepy to walk into a party where everyone is a giant boob.

Dr. Thorpenstein: It would be pretty creepy to walk into a party where anyone is a giant boob.

Zackula: This is the direction the tequila guy takes when he finally realizes his last costume was racist. "Fuck it then, I'll go as a big titty. See what the commie faggots say about that!"

Zackula: But then he can't shed the character of the tequila party animal and he walks in yelling in a really bad Mexican accent, "BEEEG TITTY IS HERE GRINGOS!"

Dr. Thorpenstein: I think it might be kind of fun to wear this to a party, because it's like an act of mental terrorism.

Zackula: I always sort of wanted to go to a Halloween party dressed as someone's kid. Now there is some mental terrorism.

Zackula: Like I noticed and incorporated a ton of weird details about their kid, like his haircut and the type of pants he wears. Maybe wear an adult sized baseball shirt for their kid's team and then just throw in some really mean detail like a huge nose or act really effeminate all night.

Zackula: That is some violence of the mind, my friend.

Zackula: It would work even better if you could get a group. Get everyone together in advance and look through their photo albums and have everyone dress as their kid. It's even better if their kid is there to get super upset.

Dr. Thorpenstein: Everyone could be a different member of the person's family.

Zackula: That could work too, but I really love the idea of focusing in on just the one kid. Like one person is the kid from '02 when he was playing for the Don's Pizza Wildcats t-ball team and another one is from when he played ice hockey. But then everyone, man and woman, lisps really bad and has a giant nose for no reason.

Zackula: That family would never recover from that shit.

Dr. Thorpenstein: Except maybe one woman is dressed in a sexy pirate costume, but she goes up to the dude and says, "You like it? I'm dressed as someone's whore wife who might be inclined to dress as a sexy pirate and who slept with Ron last year and her husband never found out."

Zackula: Over the course of like four or five Halloweens you could completely break a family down to nothing doing that stuff. Their family would dissolve or explode in a murder/suicide.

Dr. Thorpenstein: Because even if the dude's wife didn't sleep with Ron, that would be the perfect time to insert a premise like that and give him no fucking choice but to believe it.

Zackula: Fuck chemtrails, man. That is the sort of shit the real New World Order is doing.

Dr. Thorpenstein: Yeah, like in Van Halen's "Right Now" video with the little cartoon of the dude pushing the dude over and it says, "Right now your government is doing things you think only other countries do."

Dr. Thorpenstein: Remember that? This is exactly the kind of shit Hagar anticipated with that statement.

Zackula: This is some reptilian agenda level shit though man. I don't even think humans are doing this. It takes some alien intervention from Pleiades.

Dr. Thorpenstein: I bet the reptilians are doing all sorts of Halloween-related ops, like everyone going to Paul Reiser's Halloween party dressed up like Greg Evigan.