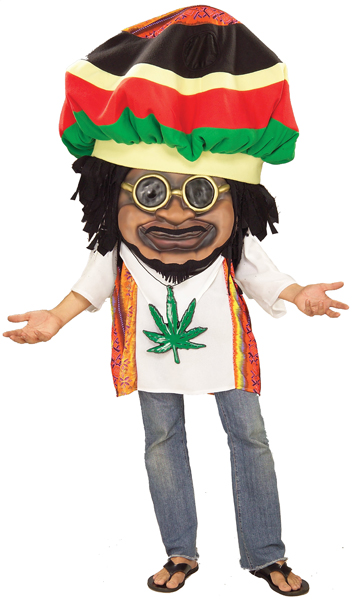 Zack: Jah welcomes ya to da new deat of Babylon!

Zack: It's fun to imagine some wizened goblin of a man in his little Halloween workshop developing costumes like this, but the truth is they just wash up on some abandoned stretch of New England beach next to a collapsing lighthouse. The rush of waves, the salty spray, a lone seagull cawing into the chill October air, and then a crashing wave brings in one, two, a dozen, a hundred of these. It is a hardy breed of man that scoops them up and brings them to market.

Dr. Thorpe: I think these costumes spontaneously generate from the ether, given form and substance by the combined hatred and intolerance of all mankind. Kind of like Ghostbusters 2.

Zack: I think it's going to take a lot more than the Statue of Liberty to defeat these things.

Dr. Thorpe: Part of me looks at this costume and feels a strange sort of envy. Don't you kind of wish our culture was this easy to sum up? We've talked a lot about irony and VH1 and Thundercats and all the useless shit we carry around on our backs, but don't you think our lives would be better if we just had "our thing" and that was it? Just weed, floppy hats, and dreadlocks?

Dr. Thorpe: The simplicity of the semiotics portrayed here is just so elegant. There's really no way to make an "American" costume that so plainly and effectively articulates the breadth of our culture the way this costume so accurately sums up Jamaica.

Zack: I think it's easier to summarize us if you're viewing the United States from the outside. To quote Orwell: "Imagine a big fat boot up a human ass, forever."

Dr. Thorpe: "Imagine a woman in a Looney Toons hip-hop shirt ordering a Double Whopper and a Diet Coke, forever."

Zack: Imagine the Vice President, signing the order to bomb civilians in Iraq, in a fat suit, with a sniper rifle and a target on his chest, forever.

Dr. Thorpe: Imagine Keith Olbermann responding with a pretentious, condescending stream of hyperbole about the incident that lasts forever.

Dr. Thorpe: Oh, wait, you might not have to imagine that one.