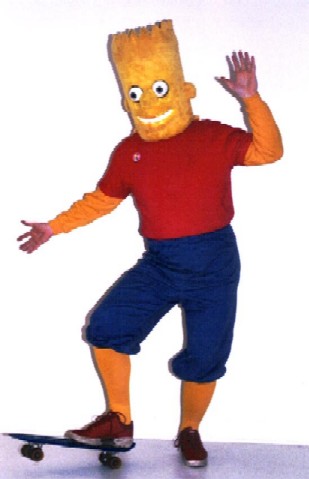 Zack: I see we've found this year's most unintentionally terrifying costume. Just imagine this guy rolling up next to you on a dark and deserted street. I think you might find yourself having quite the cow!

Dr. Thorpe: Yeah, I don't remember Bart Simpson looking quite so much like a giant, horrifying, sexually menacing piñata. Moments after this photo was taken, this guy was arrested for trying to convince a small child to "do the Bartman."

Zack: Look at those eyes! You can almost see the metal clips from A Clockwork Orange coming down to peel back those lids. Viddy well, Bart! Viddy well!

Dr. Thorpe: Yes, the costumer somehow managed to misinterpret Bart's mischievous smile as a pained, leering grimace. They also managed to make him look like a nightmarish cross between a Chick-A-Stick, a Lego man, and the mascot for some kind of professional rape team.

Zack: I can't wait for the inevitably horrid videogame based on Bart Simpson joining a professional rape team. It couldn't be worse than Krusty's Funhouse.

Zack: Man, those Simpsons Nintendo and Super Nintendo games were almost bad beyond words. Yes, what the fans of the SImpsons will love is an impossibly difficult platform game completely devoid of humor. "I cry with joy each time I miss that jump and the flying knife hits bart and I hear that two second clip of 'eat my shorts' that sounds like it's coming out of the speaker at the drive thru window of hell."

Dr. Thorpe: I'm always impressed with myself when I look back at my childhood and realize that I was patient enough to put up with games that were completely irrelevant to their subject matter and largely unplayable. I don't think I even noticed half the time. "Boy, I must be really bad at video games," I'd say as I died for the 800th time on level 1.

Dr. Thorpe: Uh oh, are we doing the "old video games sure were bad, but we didn't care" conversation? Maybe while we're at it we can dust off some more venerable chestnuts, like "The Simpsons isn't as good as it used to be" and "MTV never plays videos anymore."

Dr. Thorpe: Welcome to the Comedy Deathspiral, dear readers. We trust that you'll find our pop-culture references quite suitably ironic. Now, a word from former musician Liz Phair about something that she barely remembers!

Dr. Thorpe: "Yeah, I think I used to have a crush on Leif Garrett. Or was it Andy Gibb? Which was the one with the red hair?"

Zack: Ha ha, remember Garfield? Man...just...give him the lasagna. Or no, the Leprechaun.

Dr. Thorpe: Remember Silverhawks? I, too, remember Silverhawks, and doubtless so do many of our readers, making this article relevant to our generation. Am I being ironic, or not? As long as you can't tell, I have the upper hand.

Zack: I think I win on retro-cred though, I got diabetes from eating hostess fruit pies that I only bought because I saw Captain America selling them on the back of a Snorks comic that I got free at McDonalds at some kid's birthday party that had a Ghostbusters theme. So basically, I sacrificed my feet because I love the Ghostbusters (and the 80s) so much.

Dr. Thorpe: Hey, want to join Al Qaeda with me?

Zack: One step ahead of you bro, been working on my death to the Great Satan anthrax letters for weeks. Allahu Ackbar!