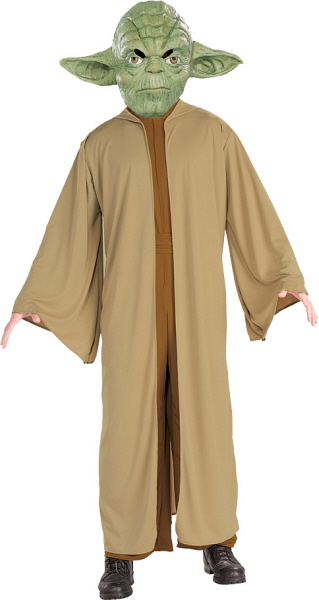 Dr. Thorpe: No fair, they just added some floppy ears to their Ernest Borgnine mask.

Zack: Yoda looks like he should be shaving some gyro meat off one of those creepy meat cones.

Dr. Thorpe: There's something so fundamentally wrong about a tall, skinny Yoda that it's kind of like being in Elementary school and seeing your teacher at the grocery store.

Dr. Thorpe: It just does something to your brain that can never be fixed.

Zack: Yoda really only works when he looks like Kermit the Frog was run through a fruit dehydrator and then rolled in hair. When he's built like a basketball player it just makes you think that when a fight breaks out in the stands it's going to be the coolest fight ever. Some loudmouthed fan is going to call Yoda's mom the wrong name and then bam he's flying around all CGI kung fu style and using his mind to sexually harass cheerleaders.

Dr. Thorpe: Plus, there are only about thirty seconds of footage where Yoda ever looks that pissed off, so seeing that expression plastered permanently into his face just gives me the willies. I feel like I'm looking at Yoda's asshole ex-marine dad.

Dr. Thorpe: "Get your nose out of that fuckin' book, Yoda, you pansy little faggot, and help me fix the basement stairs."

Zack: "You TiVo over my Rockford Files one more time with this Cosmos bullshit and I'm gonna slap you so hard you can't talk straight."

Dr. Thorpe: "I swear to god, Yoda, if I don't see you bringing home a date soon, so help me god I am going to take you to a whore and watch every minute of it just to make goddamn sure I didn't raise a fairy."

Zack: I'm just assuming that TiVo and Rockford Files reruns both existed long ago and in a galaxy far away.

Zack: "Try? You're gonna try to make the football team? Then I'll try not to beat your teeth out of your head next time you sass off to me. There ain't no try in this household."

Dr. Thorpe: "Now get your ass to the kitchen and fetch me a goddamn Rolling Rock you will."

Dr. Thorpe: "Aw hell, now you've got me talking that chink shit of yours."

Zack: "The what is in the rock? It's a goddamn rock. The only thing gonna be in anything is my boot in your ass if you don't shut up. Now wait in the car while I talk to this guy about daddy's special cigarettes."

Dr. Thorpe: "Oh, you're gonna try that 'force' shit on me? You think I was born yesterday? Here, how about I show you a little display of 'force' I learned in the Corps. See, I just put my elbow around your neck, and... what? Now you're gonna fuckin' cry? I swear to god, if you weren't such an ugly green little son-of-a-bitch I'd swear that there was a mix-up at the goddamn hospital."

Zack: After the Republic was overthrown Yoda was probably content to disappear to Dagobah where he could take out his childhood trauma on a series of dates from eHarmony.

Dr. Thorpe: Like most marital arts dweebs, he only learned to use a lightsaber to reach that grand day when he'd be big enuough to take on his old man, but really he'll always be too much of a coward and his burning hatred will only manifest itself through steely glances across the table at Thanksgiving.

Dr. Thorpe: And then one day his dad will die and he'll cry and sob for hours because he feels so guilty about wishing death upon him and at the same time feeling like a miserable sack of shit for never taking a swing at him while he had the chance.

Zack: It sounds like the plot to a Vincent Gallo movie. "Chloe, wrote the script, I did. Has to look real, it does."