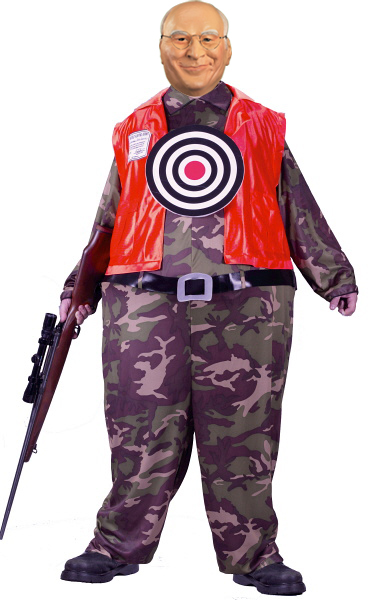 Zack: Yeah, I love it when costume makers assemble a random series of items from a political event and then turn it into a costume. Although I have to give them credit, a scoped bolt action rifle is a pretty daring costume accessory.

Dr. Thorpe: I want a costume of Howard Dean with a shirt that says "I demand a recount!"

Zack: Or maybe a Ted Kennedy costume where he's blue in the face and covered with seaweed.

Dr. Thorpe: Or a Costume of Clinton with a dick in his mouth, I guess.

Zack: I'm pretty sure I saw a banner ad for those on Free Republic. Not Halloween costumes, just something to dress your wife up as when you beat her.

Dr. Thorpe: I remember the Clinton years fondly for all the half-cocked conservative novelty items they spawned. Remember that TV commercial for the Bill Clinton wristwatch that ran backwards? Man, what a scathing indictment of his policies.

Zack: Those days were so dire that they actually gave Rush Limbaugh his own late night talk show. Thank God all of that ended when Clinton left office. The crazy radio people lost all credibility, crawled back into their swamp, and the world never had to hear from them again.

Dr. Thorpe: Well, at least we have Keith Olbermann on our side now. I wish he were black so I could accuse people of being racist when they called him "eloquent."

Zack: Olbermann is in a contest against President Bush to see which one of them can self-righteously invoke 9-11 more.

Dr. Thorpe: Oh, so Keith Olbermann is eloquent just because he can string together a coherent sentence that doesn't contain the word "motherfucker"? Is that what you're saying? Man, don't even talk to me.

Zack: Keith needs to realize that his comments cease to be special when you make them almost every day. It would be like Howard Beale making his "mad as hell" speech again for the 11 o'clock news.

Zack: He's holding up a mirror for Caligula to see his own depravity. There's a reason they have mirrors on the ceiling in half the rooms in Vegas.

Dr. Thorpe: I bet that whenever Olbermann says "how dare you, Mr. Bush," he flushes inside with this awesome little fantasy that George W. Bush just happens to be walking by a TV set in the White House and catches it at the edge of his hearing, and then he stops and walks back to the TV and stands transfixed, awed by the audacity and intelligence of this man, and with a tear in his eye he marches straight back into the war room and says "gentlemen, there are going to be some changes around here."

Dr. Thorpe: But in reality, Bush and his staff look forward to Olbermann's special comments so they can bust out the champagne and have an awesome little "as if we give a shit" party.