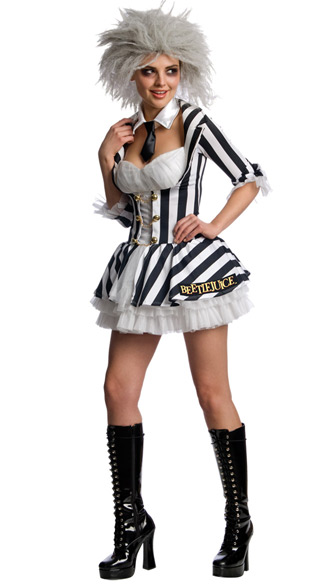 Dr. Thorpenstein: I'd be way more down with a Sexy Michael Keaton costume.

Zackula: I don't think I've seen anyone wearing a Beetlejuice costume in the last decade, let alone a sexy babe wearing one to be sexy.

Zackula: Did they focus group it with retro bloggers or throw a dart in a video store from 1991?

Dr. Thorpenstein: Like the Grinch, I think this was a preeeeeetty late night at the sexy Halloween costume company think tank.

Zackula: Maybe there's a costume designer auteur, ignoring the trends and the sales figures, poring over 1980s cult classic movies, transforming semi-obscure characters into something a woman can wear to pick up guys.

Zackula: He goes into a creative fugue, scrawling equations all over, pasting print-outs of screenshots over windows, madness everywhere until...finally...a Vitruvian sketch of Clarence Boddicker in a g-string.

Zackula: "It says 'Bitches Leave' on the skirt so people know what it is."

Dr. Thorpenstein: Or maybe it's just a low-level costume company drone given the thankless task of snapping up all the cheap movie licenses to keep their smaller competitors from scoring an unexpected hit.

Zackula: "Hi, yes, I am calling from Costume Solutions. I was wondering if Paramount would be interested in licensing the character of Hollywood Montrose...you aren't? Ah, I see, 3D reboot of Mannequin. Well, if you change your mind, I have already mapped out how to turn a lopsided fade and neon cat eye glasses into lingerie."

Dr. Thorpenstein: "Hello, Fox? Hi, this is Rick again. I just wanted to know if you'd be interested in licensing Bernie from Weekend at B-- oh, really? They did? Well, thanks all the same. Bye. ....FUCK! FUCK! FUCK! FUCKING HALLOQUEEN ASSHOLES, I SWEAR TO GOD!"