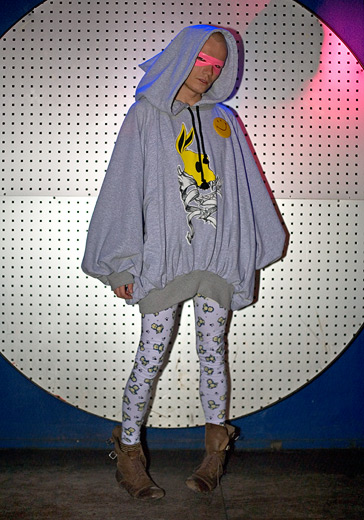 "The latex mask is by Kirsi Nisonen, the hoodie is by Daniel Palillo, the KTZ leggings are from Wunder, the Japan inspired boots are vintage Diesel.

Nu rave and renaissance, the time of Christopher Columbus and baggy shapes inspire me - but always with a touch of Nazi Germany to avoid a too clowny and buffoon look!"

Zack: Maybe Batman movies are just beginning another one of those tragic downward spirals.

Zack: Actually, you know what, he looks like Orko.

Zack: Dickheads of the Universe will be right back!

Zack: I can imagine him heading down into the sewer to listen to the tones of the pipe egg. He floats down there during the commercial break and pops that thing in his ass.

Dr. Thorpe: And call me crazy, but this guy strikes me as a guy who can fly. He's just about to achieve liftoff in this picture, I think.

Zack: I think he's more of a ground effect vehicle. He hovers around kicking up dust and flinging cheeseburger wrappers and used condoms at you.

Dr. Thorpe: You know what I find comforting? The fact that, from reading his blurb, I can tell that he is every bit as ridiculous and detestable as his fashion sense.I'd be a little weirded out if he seemed like a nice guy, but no, all is right with the world. He is a huge titty.

Zack: When I think Christopher Columbus, Nazi Germany, and not looking "too clowny" I definitely think of a pink latex Lone Ranger mask and a 6XL sweatshirt.

Dr. Thorpe: Like, have you ever seen an interview with John Mayer? He seems like a truly decent, funny, interesting guy, which is profoundly disquieting since he sucks so fucking bad.

Zack: No, but I saw a YouTube video where he was screaming about Ron Paul, so maybe he's not such a decent guy.

Dr. Thorpe: Oh, he's an idiot? Whew, what a relief. I'll stick him in the "tit" file with this guy and move on.

Zack: If the musicians are rocking out for the invisible hand of the free market, the abolition of the department of education, and a return to the gold standard, then, well, actually that's probably better than rocking out for farm subsidies.

Dr. Thorpe: Keep On Rockin' in the Free Market.

Zack: Anarcho-Capitalism in the UK.

Dr. Thorpe: "Go back / to those gold standardz."

Zack: "How long / how long will this song remain viable as a revenue stream?"