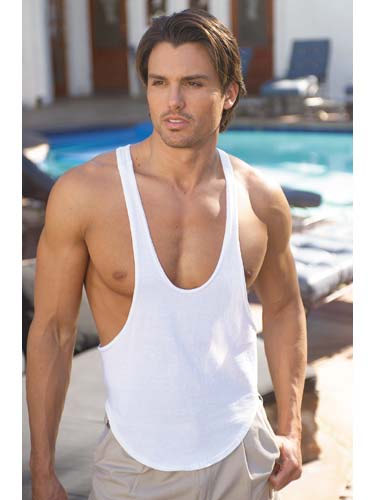 Dr. Thorpe:This is called the "why bother" shirt. "Can't let anyone see my belly button! Everything else is fair game, though!" This guy probably has terrible c-section scars or something.

Zack:The guy has a fascinating haircut. I didn't think you could manage a widow's peak with the faux-jaunty flopover. It's like Dracula after he goes swimming.

Dr. Thorpe:Ordinarily you'd wonder whether this guy's tan was real or spray-on, but if it's Dracula we know for sure.

Zack:Obviously it's not the original Dracula or even the creepy absinthe-slurping perverted uncle Dracula in "Bram Stoker's Dracula." This is the prancin' and kissin' dudes Dracula from Ann Rice novels. The one who was in a rock band. I mean seriously, Dracula in a rock band? That was back when Ann Rice was well-regarded by at least a few people and that sounds like a plot from a Goosebumps novel. Ann Rice's "The Monster Mash."

Dr. Thorpe:You know what, fuck this shirt. Your exposed nipple isn't supposed to be on that side of your clothing. You can't have clothing in the middle of your torso with the nipples on the outside. Nipples don't belong in sleeves!

Zack:Maybe the dude just really got hungry for some lobster and didn't want to mess around with one of the restaurant's bibs.

Dr. Thorpe:Or maybe they had to find the model with the most far-afield nipples so they could get this outrageously gross effect.

Zack:As you build up muscle mass maybe your nipples just naturally gravitate outwards until they're on your back and secreting human growth hormone. I'm pretty sure that's where they get that stuff. These guys just suffer massive embolisms and end up in a coma and then GNC buys out their insurance and hooks them up to a milking machine. The next thing you know Barry Bonds has hit 500 homeruns in a single game and he can dead lift a pallet of lead bars.

Dr. Thorpe:I'll bet that all the liquids that come out of this dude are useful body-building supplements.

Zack:He brushes his shoulders off into a cup and then adds water. Instant protein shake.

Dr. Thorpe:It sort of looks like this guy was wearing a regular tank top, but then an alligator got a hold of the bottom of it and thrashed around until it was stretched all to hell.

Zack:Thank god the alligator didn't take a bite out of this guy. It would be biting through subways and covered in nipples.