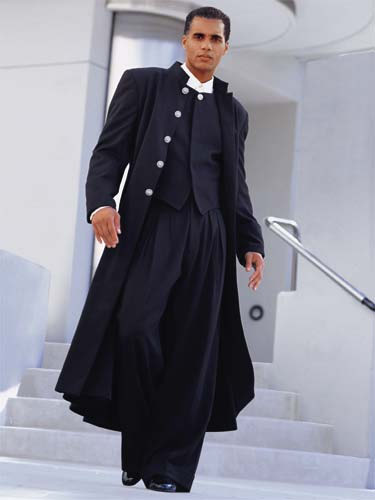 Zack:"The Matrix" did some really bad things to fashion.

Dr. Thorpe:He looks like some kind of Anime character or something. He's about to whip out a sword that's twice as tall as he is and cut a little girl in half.

Zack:Nah, this guy obviously has giant revolvers and he fights vampires or ghosts or something.

Dr. Thorpe:You know, costumes like this look alright in movies if it's the future or something, but if you see a guy dressed like that on the street, you don't think he's a badass, you think "this guy jerks off to comic books."

Zack:This is what Blade would like if it were Japanese. Daywalker-kun.

Dr. Thorpe:This coat was actually inspired by the Italian Renaissance. We stand corrected.

Dr. Thorpe:Jeez, it would be so perfect to push this guy down the stairs. I'm not a violent guy, but can't you just see the appeal of that instantly? I don't even think it counts as violence. I just want to push him down those stairs and watch him get all tangled up in his London Opera Trenchcoat.

Zack:Oh yeah, definitely. That would be great. Just to see him flailing and flapping, hear his big buttons clanging on the steps, and then view the results. It's like an experiment. It's for science. They have to put black guys in the outfits this ridiculous so that white guys reading the International Male catalog will be like "hells yeah, that is off the hook."

Dr. Thorpe:Yeah, if it's all white guys, it would be a disaster. Imagine if a black person got a hold of the catalog and saw all those white people dressed like that. We'd never hear the end of it.