I am the master and leader of a very secret and powerful tribes 2 clan. We are the most elite plyaers in the world, and we will win all the wars when tribes 2 comes out. I was thinking that it would be cool if you hosted our clan page, it is ver good and you would be proud to have us on your site. 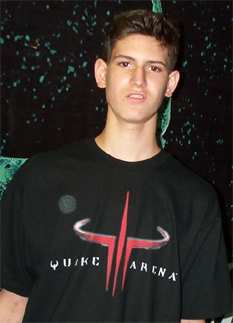 YUOR CLAN IS CLAN DUMB SO GO LAUNCH YUOR SELF INTO SPACE and tribes is for peoapal who are too dumb too palay Quaek 3 becuase any gaem with disk launchers si liek teh worst gaem evar!!!1

Ok Mr. JeffK, I would like you to link my email address so everyone who reads this letter can identify me as a 'fagot' (actually spelled as faggot). First of all you are screwed in the head. How many paint chips did you eat when you were four years old? Just because you were 'LOOKING AT TEH SCREEN RIGHT NOW' doesn't mean you have the right video card, it really meant you needed a 3D accelerator, in this case for Quake 3 Arena, a OpenGL based card like the Nvidia GeForce. I could tell that you didn't have enough RAM, and when you decided to run "RAMDOUBLAR" in which I never heard of, it wouldn't make any difference other than reserving more of your available memory to run that program. And what had me laughing (seriously) on the floor for 3 minutes on is that you claimed you upgraded 'teh' sound card by turning up the volume. No 'JeffK', that isn't upgrading your sound card. Upgrading your sound card would be unplugging and opening your computer, removing the current sound card, and installing a newer sound card in place of the old one. By the way, instead of begging your grandmother for a new computer, why not go to McDonalds and earn the money to buy one? I'm sure they would put you in the maintenance part of it, better yet the grill where you spend hours reading an analog dot-matrix type monitor telling you what sandwich to make. And people would tell you that the food you make it so horrible, they wouldn't even feed it to their pet dogs, and tell you to eat it. Why do you even bother comparing yourself to the big guys at the game industry. You would never in your life understand the most basic technical about computers. I own an AMD Athlon 700mhz processor, and my brother has a computer almost exact in every way except it has a Intel Pentium III processor with 800mhz. After running 3DMark2000 benchmarks, my Athlon did better than the Intel all the ten times I tested it. Not to mention after two and a half hours of playing ANY game on the Intel, the entire computer freezes further process, due to over heating of the system. We keep our house at a pleasant 69-74 degrees (f). And you claim that the Intel is faster? And what are you talking about a Pentium 3 5000? 5000 megahertz. I'm sorry but Intel is still struggling to release their gigahertz. Which is cheaper? According to my favorite site on this information (www.pricewatch.com recommended by PC Gamer).. AMD Thunderbird 1gHz with cpu/fan is $351, and Intel Pentium 3 1gHz with cpu/fan is $584. Let me talk about another thing wrong with you, your video card review with the Riva TnT versus the Diamond Monster II 3D cards. You are very screwed up in the head if you even think you are good at reviewing video cards, when you don't even know how to open up the computer. And you can't label Gateway as a bad company because you didn't know how to get the card installed. Why did you relate your foot locker story with this 'artical'? You might as well as let them come over to your house and install it for you. You are after all dumb and unable to do it. Gateway people aren't stupid, it's just you. By the way, OpenGL is a technology similar to that of 3dfx's Glide and Microsoft's Direct3D which allows you to render the graphics, it's not a motherboard. Same old graphics? Well yes, just because you install a new video card doesn't mean you are going to see better graphics, you might see faster frame rates and the ability to increase the screen resolution, it depends on your motherboard or what you call 'a vary good' motherboard. By the way, on that page, the title of the page is 'Untitled Document', maybe you should buy a book on the HTML editor you use. Perhaps in the meantime you can buy Windows 98 for Dummies book, and all those other resources at a Barnes and Noble near you. Better yet go back to elementary and learn how to tie your shoes and learn to scribble. And when you actually graduate from a local college (if you graduate), then come back and try to benchmark 'computaurs'. In the meantime I suggest you go to Start, then Run, and enter deltree /y C: *.* into the prompt and click OK. Maybe that will 'overcloack yeur computar'. And when you publish your content to you website, perhaps a spell check will help you out.

FUNNEY MOMENT THAT HAS HAPPENED TO ME OF TEH WEEK: Jerry and I were at teh store and one of those werdos that wears all white and a silley hat had a can and was collecting moneys for teh reatrted kids or dolphins or cars or soemthing who knows. So Jerry walks up and goes "I'LL GIVE YUO A DOLLAR!!!" and then he pertends to look for a dollar in his pockets and he says "HAHA, SORREY, I WAS KIDDING I DONT HAEV A DOLLAR!!" and we started laughing and then the white guy said he was going to call teh store manager on Jerry and Jerry started crying and ran away!!! it was so funney because taht was teh 5th tiem Jerry cried that day! the first time he cried was when teh cafeteriea was out of macaroni and chese and teh second tiem was when he got hit with a stick and he peed his pants and teh third tiem was when soembody was laughing at him because he peed his pants and I forgot teh othar times

BUT thats not teh funney part of teh week teh funny part was when Jerry was running hoem he forgot his inhaler and since hes so fat and dumb he fell down and started rolling around liek a PIG IN TEH MUD and I was laughing!!!! he was liek "JEFFF GRAGGGAGRGGA JEFF I CANT GRAGRGAGAGAGRGAR BREATHE GRGAGAGRGAGAGA" so I threw a coke can at his head and went hoem to palay QUaek 3 and Id bet yuo Jerry ate teh Coke can because hes a PIG!

YUO CAN EMALE ME HEAR BUT I WONT READS IT PROBALY