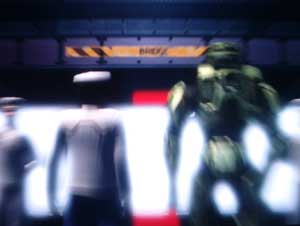 The computer animated cutscenes look amazing. Too bad the actual game doesn't look this good.After years of delays Halo finally arrived on the Xbox as a launch title in 1999. The dramatic development cycle for the game was a long and eventful one. This may come as a surprise to most of you but Halo was actually first planned to be released on the Macintosh. While the deal was great for Macintosh Bungie questioned the platform's viability as a game machine. Bungie then set their sights on Sony and their powerful new PlayStation 2 game console. After weeks of negotiation Sony ended up rejecting Bungie's offer saying that Halo was not a game that PlayStation 2 gamers would enjoy playing. This gave Microsoft the opportunity to swoop in and offer Bungie a deal to publish the title on their fast approaching Xbox game console. While the Xbox was less powerful and less popular than the PS2, Bungie agreed and set to work on porting the game onto Microsoft's debut game system. Halo was a smash hit with early adopters of the Xbox console. While many players were weary about how a first-person-shooter on a console system would play, the game ended up being the first console first-person-shooter that was actually fun to play! The game went on to sell more than 500,000 copies and has been on most critic's top ten lists for more than three years. A sequel was inevitable. After a long wait Bungie has finally delivered Halo 2. The question is now, does it live up to it's predecessor's legacy?

Halo 2: Combat Evolved tells the story of a universe devestated by strife. An alien race of aggressors called the Coveners travel through the universe assimilating other species into their evil sect. Now they have their sights set on Earth. Master Chief, a U.S. military soldier who dons an expirimental battle armor that regenerates its shields automatically, has been called out of retirement to defend Earth and drive away the evil invaders. The story is told beautifully through CG cinematics and cut scenes. While the initial introduction sets the mood perfectly, the story falters in the later levels. There are many twists and turns in the game but some of them are never explained. Why does Master Chief work for the Covener forces halfway through the game? Who killed Cortina? Where did Captain Jacob Keyes get his new warship when he was killed off in Halo 1? How did the Covenent destroy Earth at the end? While these story twists are exciting to watch when told through cutscenes I couldn't help but be confused by all of them. By the end of the game I was left scratching my head. The story sets you up and then ultimately lets you down. Even though the story was a big let down I still had huge hopes for the gameplay. How did it fare? Not well to put it bluntly.

If Halo was an elementary school version of a PC first person shooter than Halo 2 is pre-school. The first thing you notice is just how easy the game actually is. No matter what I did the aiming felt like I was on autopilot. Just point at an enemy and your targeting reticle will automatically track them. I felt like my hand was being held through the entire game. I'm not surprised though, this is Xbox. Many of the people who play Halo cannot afford a PC or cannot understand how to use a mouse and keyboard setup. For people like that Halo 2 is a great investment. It allows them to test the waters a little bit before graduating to real first-person-shooters on the PC. My hat goes off to Bungie for introducing a new generation of gamers to the first-person-shooter. 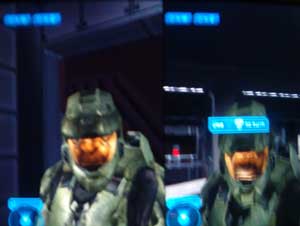 Co-op mode returns and it's actually pretty fun with a friend. I don't like the new vertical split screen though. I wish they had included an option for horizontal split screen.While Halo 2 is not a huge step up from the previous version, the title builds on the first game in a number of ways. First there is dual welding. This technique allows the player to pick up another weapon for use later. All you have to do is press the Y button to switch to the new weapon when you need it. Another new technique is car jacking. By pressing the B button while close to an enemy vehicle you can board that vehicle and knock the driver out. After six years in development these are the only new gameplay ideas Bungie could come up with. Of all the things to add to a game I am wondering why they chose to add these features. What about fixing all the things wrong with the first Halo? How about the flashlight can only stay lit for 30 seconds? With all of the technological gadgets that Master Chef wears you'd think he could afford a flashlight that stays on for more than a half a minute. What about the horrible frame rate issues? The first game was capped at 25 frames per second and Halo 2 is no different. It's actually capped at 12 frames per second, even lower than the first game. This makes the game hard to control and causes me to develop headaches if I play for more than 15 minutes.

Many reviewers have touted the game's wonderful graphics. While they are improved from the first game, I must be crazy because I see a whole different picture. The textures are muddy and sparsely detailed. The geometry is simple and boring. In some scenes, if you squint just right, Halo 2 looks like a Nintendo 64 game. Bungie tried implementing shader effects into their aging engine but the Xbox simply can't handle them. If you turn around too quickly you can see textures and bump maps appear on the walls and floors of the map. I can't blame the game though. Bungie is doing it's best to work with what is basically a 500 MHZ GeForce 1 computer. When you realize that Halo 2's graphics aren't that bad. But they are a far cry from the crystal clear images you would see in a PS2 game like Metal Gear Solid 2.

Sound is a mixed bag. While the voice acting is adequete, the music is uninspired. First-person-shooters just don't feel right with orchestral soundtracks and humming monks. An action game really needs techno and happy hardcore music to get most players pumping. Marty O'Donald's soundtrack is basically a rip off of John Williams. Poor show Bungie. 5.1 support is broken as well. All I could hear in my rear speakers was the sound of running water. The sound effects are terrible. The guns don't sound realistic at all. They sound more like pellet guns than real firearms. 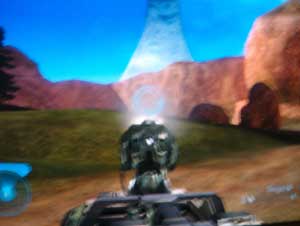 All of the multiplayer maps in the game have been recycled from Halo 1 and given new names just like Blood Gul- I mean, Cogulation. It didn't fool me though. Nice try Bungie.The biggest feature added to this year's edition of Halo is Xbox Live support. Xbox Live costs around $9.95 a month and can be enabled by purchasing a start up disc from Microsoft. Why bother though? Xbox Live games are so laggy that it's hardly worth playing. Often, players will skate around the maps as if it were ESPN NHL Hockey. Voice communication has also been added but all you'll hear is static and people screaming in your ear. While getting into a match is easy enough with Bungie's new Optimum Match feature, staying in one is a lesson in frustration. Whenever someone drops the game will try to reconnect with all of the players. This rarely works however as the Xbox simply crashes most of the time, at which point the system must be rebooted. If the game does actually recover itself be prepared for some massive lag and an unplayable match. If you finally get into a game that's playable be prepared to be slaughtered by the horrible gameplay imbalances that rear their ugly heads. Shotguns and pistols are virtually worthless now. Their strength and range have been dwarfed. Players who use the power sword usually "earn" themselves a first place position in every match though. The problem with the sword is that it's easy to use and kills players in one hit. It's terribly unfair and poor design on Bungie's part.

There are numerous gameplay modes to play on Live, including deathmatch, capture the ball, king of the flag, and domination. In deathmatch you simply kill or be killed in a fight to the finish. Capture the ball allows players to fight for control of a skull can be used to bash players in the head. The player with the most ball kills wins. King of flag is a variant of the tired and true capture the flag mode. There is a twist here though. There is only one flag and it's in the middle of the map! No more flag bases this time around. Finally there's domination, which is basically a rip off of Unreal Tournament's Onslaught mode where players must fight to hold points on the map for a specific amount of time. These modes are fun but have been seen before in many other games. There's nothing new here that you havn't seen before in Counter-Strike mods.

A little less than a day after the game has been released some Xbox owners are reporting troubles with loading Halo 2 maps. I just wanted to let those of you who have the Thompson DVD drives on the newer Xbox models know that you will experience some errors that include levels not loading, textures not appearing correctly, and game crashes. If you really want to play Halo 2 now it would be a smart investment to buy an older used Xbox with a Panasonic DVD drive.

Even with these critical flaws this isn't stopping sales of the game at all. In the first month of release alone Microsoft is claiming that the game has made just under 25 million dollars, which would be an all time sales record for a video game. Of course, that's units sold to retailers, not units sold to customers. Most of those copies will never leave the store shelves.

Halo 2 is just another example of a game company releasing the same thing over and over again just to make a quick million dollars. Sell me snake oil, shame on you. Sell me snake oil in a fancy new imported glass bottle for 50 bucks, shame on me. It's about time we all stop indulging in the massive hype games like Halo 2 generate and purchasing such generic games. It's about time we saw the truth in media. Don't buy Halo 2. There's another recent game I would recommend a million times over Halo, and that's Grand Theft Auto: San Andreas. You'd be doing yourself a huge favor.