I Have No Chill And I Must Scream

This article is part of the Trials of the Chillsquatch series.

Big thanks to Ian BFM Helm for knocking this weeks art out of the park. Give them money for their art. 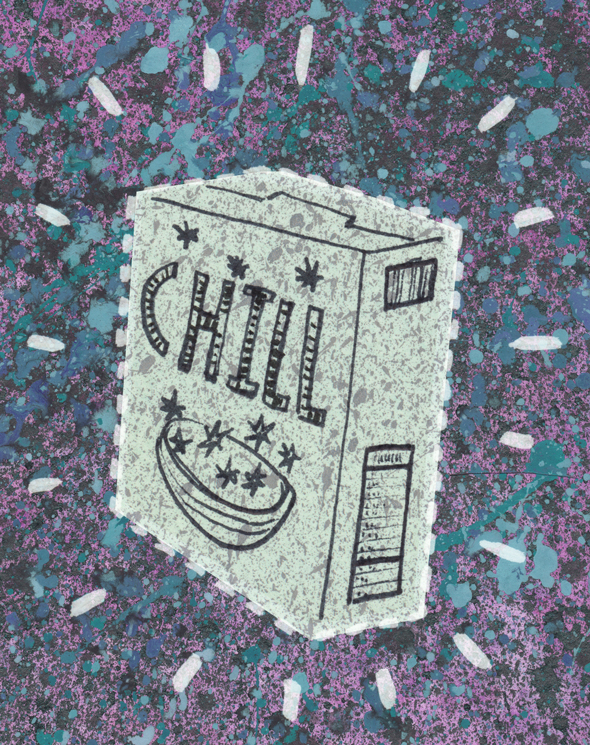 I was a fool. This much is obvious, now, even to my dipshit eyes. I forced myself to ignore it, told my family I was just tired, stressed, overwhelmed with my extremely important job of yelling at strangers on the internet. Oh, they believed me, for a while.

When my fiance asked where my chill was, I assured her it was locked safe in my office strongbox. Tucked behind the plumbing access hatch in the bathroom. Hidden in the Kashi cereal boxes in the pantry. "I've got chill." I'd say, patting her shoulder as she headed off to bed, knowing I'd spend the next three hours berating Mormons over IRC.

I convinced everyone I was rationing chill, that it was healthy to be angry when things are as obviously terrible as they are. Instead of resolving conflicts, I impugned my friends' personal politics and sneeered at them from a place of unwarranted self-superiority. I stopped feeling joy, convinced it was blunting my dedication to the cause. This continued up until the day I was set to debut on Fox News, sadly my opening segment was usurped by a high-speed chase involving multiple Weinermobiles, and never aired. 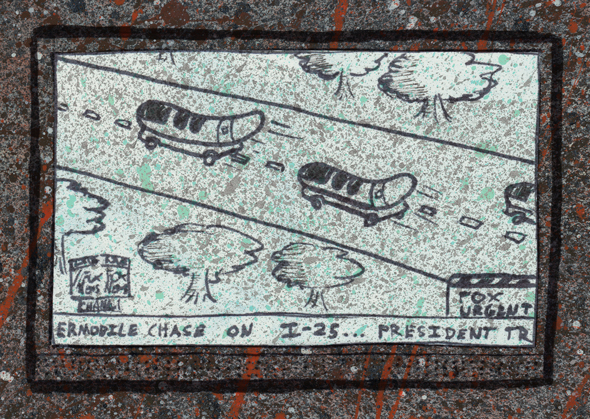 Slowly, the evidence began to mount, stacking itself into the shape of an enormous middle finger which stayed pointing at the viewer no matter where in the room you stood. It was little things at first, like when I stubbed my toe on an end table and responded by accusing it of witchcraft. When I accidentally tore a page from a Baker Creek Rare Seeds catalog, I tried the book for heresy. It got worse, the library reorganized the graphic novels and I took a pry bar to their cornerstone, attempting to physically lift up the entire structure and hurl it into a nearby stream. All because their collection of Tintin hardbacks had been moved three shelves to the left. That's no way for anyone to live.

It wasn't just inanimate objects that suffered my wrath, either. When a trio of my closest companions falsely accused me of treason to steal my fortune and fiancee, I decided to get revenge by imprisoning myself in Chateau D'if, where my years of friendship to a secretly rich cave-dwelling kung-fu eccentric would bestow upon me the martial prowress and social cunning to return to my hometown in disguise, kill my old friends, and lure their children into lives of exploitation and depravity.

I made rude grafitti about them instead. Turns out the Chateau D'If is a mall now, so the cave dwelling kung fu eccentric population is probably extinct.

My mission foiled, and with no home to return to, I fell into a tragic yet handsome malaise, walking the earth like that dude in Kung Fu. Before getting banned from Arkansas, I was identified as the primary vector for three highly contagious fetishes. I either worked for, or robbed, a Renaissance Faire. That's just surviving, baby.

After day drinking in a bathtub by the train tracks, I tried to confront one of my persecutors outside their homes, but their mother informed me they were attending a Bitcoin conference in Thailand. Then she complimented me on my full plate armor and politely asked my mighty steed to stop feasting upon her rhododendrons.

Instead of responding rationally and calmly, by thanking her for her compliment and reigning in my hungry beast, I proceeded to joust every car in a citywide rampage which was only ended by a coordinated strike involving an entire halberd-weilding intramural hockey league in full protective gear. That might sound cool, but what kind of a message does it send to the kids in my community?

I ruined a lot of potential careers with my violence, and that's nothing to be proud of. Frankly, I didn't even enjoy it while I was doing it. I was just externalizing an internal hurt, through a series of equestrian martial arts that you wouldn't expect a stout fellow like me to execute, in even the lightest of armors. I was just punching and kicking, kicking and screaming "I've got chill! I'm not mad! This is actually funy, to me!"

Backflipping off a horse while doing my best Heath Ledger Joker laugh. I distinctly remember destroying a police car with a mace I just, found? Either I pillaged a Crossfit or it dropped out of the inventory of a sophmore i punched into a frozen yogurt restaurant. A lot of that day is a blur.

It took two hulking goalies, jumping off of lamp posts on opposite sides of the street to knock me off Widdershins. But when I fell, I fell hard. "You have no chill!" Screamed Garret Blythe, starting goalie for the Smith College Pizza Eatin' Suffragettes. He slammed a cracked helmet into my steel visor so much it dented inwards, like a toaster fallen on hard times. "You lack all possible chill! Your soul is a desert unto which chill is water! You are bereft! Chill has searched the Book of Life and your name does not appear! You are a stranger unto Chill and have been cast out of the presence of Chill into Hell, which is the place no Chill may enter!"

I couldn't fight back, my arms used that moment to go on strike. After bailing me out, my ex-fiance suggested therapy. I suggest she murder me with a comically oversized axe then turn my skin into thigh-high boots, but as soon as I said it out loud, I knew she was right. I could deny my lack of chill no longer.

I journeyed north, until I found an ashram of Chill Monks, dwelling in an elaborate glacial temple. It took me a week of hanging out on their front step, just rolling joints and beatboxing, until they let me in. After a year of working in the Chill Kitchens, I earned the right to train with the other disciples. We worked our fingers to the bone, listening to smooth jazz in libraries, playing bongoes on candlelit Parisian balconies, the chillest acts imaginable. Every meal was a poke bowl shared with close friends in a trendy but casual restaurant. There is no chiller meal possible, Science will not allow it.

During the Uncelebration of my fifth year, I formed the chillest band imaginable. I and the other performers would each play a single note in a separate room at the same time, whose locations would only be divulged in handwritten wax-sealed envelopes. Nobody showed up, it was a smash success.

We had plans for a followup album we would release exclusively as handwritten pages of music, given at random to strangers in coffee shops, but eventually we decided it would be chiller to just, not.

The chill consumes me, now. I am a sticky yet pliant man-mochi wrapped around a rock solid frozen core. I am a conduit for the Will of Chill to enter the world and transform it. I blast aggressors with an undodgable number of Chill Hadoukens, ruining them with frostbitten calm. My blood type? Vaporwave.

It holds me captive. At night, as I try to leave, it grabs me round the throat, says it cannot exist in the warm lands, that my journies will return me to the rage i had abandoned. Now that you have known such chill -it whispers in it's Wormtoungiest voice- imagine how much hotter burns your rage! And the ire grows hot within me, for I know the voice speaks truth.

So, once more I drify, my hair thick and omnipresent as a buffer against the wind, surviving off of stolen campfire hotdogs and illegal cannabis plantations. When righteous children see me, I make sure to smile and wave, for the common folk whisper my name, know the woods are haunted by. . . The Chillsquatch. 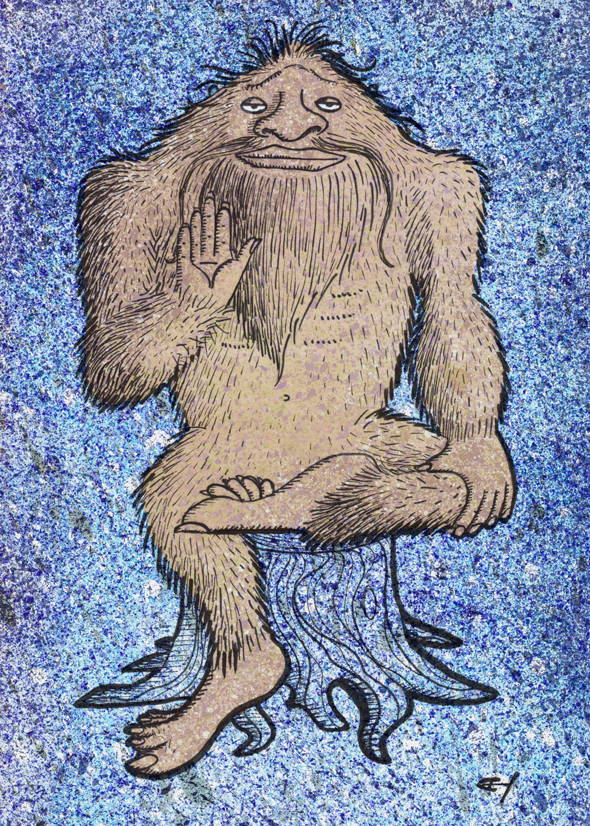 An angry fellow forsakes the ways of rage in search of a greater peace, a chill of soul which no failures or setback can disrupt.