The History of FAKE Las Vegas 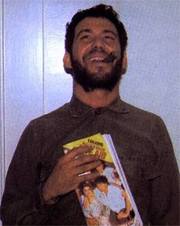 FAKE Las Vegas was founded in 1998 by famed entrepreneur and businessman Carl "The Duke" Winchester. If you believe you've heard his name before, you probably have; Carl Winchester is the man responsible for many remarkable and fabulous inventions that each of us use every day in our homes or places of work! Ever wonder who is responsible for the those nifty Spandex sunglasses you see "famous" Hollywood celebrities wearing every day? Carl Winchester! Have you ever been curious as to who invented that robot who cleans your monitor every half hour with a jug of Chlorox and a squeegee the size of a baby's head? Carl Winchester! Carl also claims responsibility for the creation of the wheelbarrow, anti-lock brakes, the PC, aspirin, and most of Georgia (note: these claims are currently under dispute in court).

The history of FAKE Las Vegas traces back to 1997 when Carl Winchester had a dream. He had a dream that gigantic millipedes with the faces of popular late night talk show hosts were chasing him through the basement of a Sears factory outlet. More importantly, he also had a dream to create the world's first "full family" entertainment location, a place which offered excitement for both adult and non-adult creatures. After visiting the so-called "lovely" Las Vegas, Carl realized that the city had potential but went terribly wrong somewhere in it's shady history. Carl, just like when he created the world's first 1,000-ply toilet paper, knew he could do a better job. He worked nonstop night and day with famous architects, city planners, football celebrities, and ex-prostitutes to design an "improved" version of Las Vegas, one that would succeed in all the areas Las Vegas failed. After countless hours of grueling work in a poorly ventilated room full of used fertilizer bags, the plan was complete and FAKE Las Vegas was born. Then Carl realized that he had accidentally just copied the layout of the nearby International House of Pancakes, so he crossed out a bunch of stuff and added a lot of "rafters". Then the FAKE Las Vegas was REALLY born.