"This one is special," the scientist gestured to one of the specimens, "the parasites migrated to the host's head and attached to central nervous tissue. They remained dormant for several days and then migrated back down into the circulatory system. We believe while in the nervous tissue they may have released proteins to prevent an intruder response from the immune system."

The specimen bucked against the restraints holding it down.

"Only just," the scientist leaned forward to get a better look. "Calm now, little lady."

"Oh, yes, great timing. Here they come." The scientist could not suppress a smile. "This is great. Watch carefully."

Already a raised area was appearing on the specimen's stomach, just the slightest hint of movement as though a thumb were pressing from inside and rotating in a slow circle. The first lump became more defined and several more began to press out. The specimen shook mightily in its restraints but only managed to further pain itself. A tiny hole appeared at the crest of the largest of the lumps and a thin stream of almost clear liquid began to ooze out. The hole widened as more holes appeared on the more than ten lumps thrusting up from the specimen's abdomen.

"Grotesque." The man remarked to the scientist but did not tear his eyes away from the sight.

Motion was clearly visible inside the specimen's abdomen and one by one hideous chewing mouths appeared at the wounds. They sucked and bit and the specimen's wounds wept more clear fluid. At last they wriggled and writhed out one after another; eyeless, horrible and monstrously large. One end was little more than an enormous mouth followed by segmented fat flesh ringed with hook-like spines. This body accounted for a third of their length, but more of them kept oozing and slithering out of the now-dead specimen. Their long whip-like tails thrashed in the pooling remnants of their host's innards.

"We're predicting a 75% or greater infection rate on the field trial that begins tomorrow." The scientist slid a metal separator from beneath the specimen so that the parasites could drop onto a prepared spawning surface.

"Fantastic." The man smiled. "Let me know how your study goes." 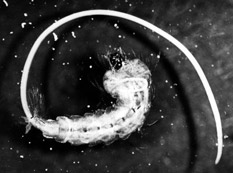 Go to sleep, go to sleep, go to sleep little bay-bee.If you saw Romanomermis culicivorax slithering towards you down the street you probably wouldn't stop to shake its hand. R. culicivorax doesn't have a hand, but even if it did, you'd probably want to steer clear. It's a nematode referred to as a mermithid with reproductive and feeding habits best described as "horrific." Its eggs remain in soil for up to several weeks until temperature and moisture conditions become appropriate. It then hatches and swims until it makes contact with a suitable host probably by accident. It burrows into the host and takes up residence there, feeding on fat in the host's body and hemolymph until it reaches a surprisingly large size and emerges. This kills the host.

Fortunately for us, the host is a mosquito. R. culicivorax has been undergoing field tests since the mid 1990s for use as a biological form of mosquito control. It is not known to parasitize humans so millions of them could be dumped into bodies of water including city reservoirs. The EPA has waved a vague permissive hand in the direction of mermithid pest control methods. Perfectly safe, they hope.

When it comes down to the details nature is a horrible thing. You see a beautiful burbling stream but up close it's choked with creatures like R. culicivorax burrowing into or bursting from hosts. R. culicivorax just happens to be one of the parasites that we may have found a use for, but there are many more, and they are very interesting. I would like to devote today's update to this particular dark side of nature and discuss three of the strangest parasites yet discovered. 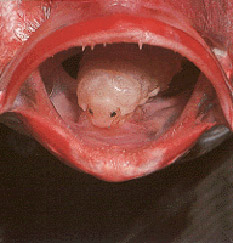 C. exigua got yer tongue?You've gone out to dinner with your girlfriend at a restaurant that just opened. You ordered something nice and thick like a 50 ounce steak, she's decided to order the red snapper. To your amusement and your girlfriend's surprise the fish is served whole. The waiter offers to take it back and trim things down a bit, but your girlfriend gamely refuses. Her discomfort turns to horror when she notices something strange inside the fish's mouth. Inside the gaping maw is a yellow-white bug roughly the size of her fingertip. Cymothoa exigua has just ruined another meal.

C. exigua is truly unique in the world of parasites - as far as we know - in that it literally replaces and functions as one of its host animal's organs. C. exigua is an isopod (think wood louse only evil) that enters its host through the gills and sinks its hooks into the host's tongue. The little bastard then begins to drink blood from the main artery in the fish's tongue, gradually siphoning off enough to wither the tongue to a stump. Rather than leaving to seek out redder pastures, good old C. exigua lends a helping body by securing itself firmly to the stump and then serving as the fish's tongue. In this way C. exigua creates a cripple and then develops a symbiotic relationship. "Oh sure buddy, you're in quite a pickle without a tongue, but I'm your old pal so I'll stick around and take its place."

C. exigua doesn't just sit there: it actually functions as a tongue and sends food down the fish's throat. Of course, C. exigua also takes its own cut from any food the fish happens to be eating.

Let's Go for a Swim. I Insist. 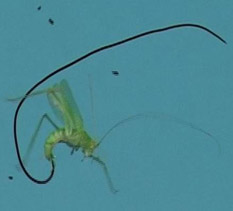 That grasshopper is crazy he has a tail!! Oh...You're out for a swim after dark and you happen to notice a cricket hopping merrily across the concrete in the direction of the pool. With remote interest you watch it hop, slightly surprised to see it moving purposefully towards the pool. The damn things have a habit of falling into the pool while trying to get a drink and you figure you might as well bail this one out if he takes a dive. You swim over to that side of the pool just as the cricket takes a direct leap into the water. The cricket flails madly, no doubt drowning. But as you reach to scoop it up and throw it to safety you notice a cloud of liquid emerging from the cricket. And the cricket seems to be growing a tail. And…and…EVERYBODY OUT OF THE POOL! You scramble away as a whirling hair-like black worm nearly ten times the length of the cricket emerges from its host. You're never swimming again.

That's just little ol' Spinochordodes tellinii or the hairworm. This little guy likes to find his way inside grasshoppers, crickets and other plant-eating insects. Once inside he feeds on everything there. What few organs the grasshoppers have S. tellinii will gobble up. He'll almost completely drain them of hemolymph and he'll chew away all of the meat underneath their exoskeleton. By the time S. tellinii is done there will be little more than a shell with legs and a brain.

But S. tellinii isn't satisfied, oh no, he needs water to reproduce so he turns his attention to the last remaining sweetmeat inside his host. S. tellinii begins secreting controlling proteins into the grasshopper's simplistic brain and remote pilots the poor host to the nearest body of water. Once there the bug gets one last order from S. tellinii to take the plunge and then without a thank you or a goodbye the creature erupts from the still-twitching carcass, by then grown to a size usually several times the length of its host. You can watch a video of this gruesome process if you are so inclined. No word yet on whether or not S. tellinii will instruct its host to point and make a weird moaning scream if it spots an intruder.

It's Just a Fluke 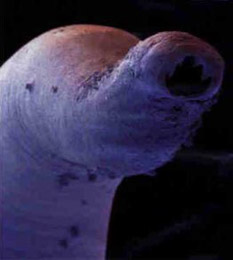 Unfortunately, few flukes choose dentistry as their profession.S. tellinii isn't the only mind-controlling parasite out there. Frankly, its horrific lifecycle is nothing compared to the elaborate love-'em-and-leave-'em habits of the lancet liver fluke (Dicrocoelium dendriticum). This little guy likes to get in the bile duct of sheep and other livestock and make a home there, sending out his offspring via the sheep's digestive system. He's a nasty one because he can cause fatal cirrhosis of the liver and doubly so because, though uncommon thanks to his vector, he can parasitize humans.

Let's start with the sheep. D. dendriticum is swallowed by the sheep while grazing (more on that later) and enters the digestive system where he finds his way to the bile duct of the sheep. There he makes his home and reproduces, often multiple times, releasing happy little packages of mirth in the form of thousands of eggs. These eggs are seeded like nuggets of gold in the sheep's manure. Eventually this dung will prove to be a snack for snails and in so consuming their hearty repast they will also find a bonus of free D. dendriticum eggs. These tasty treats hatch inside the snail, feed and go through two stages of development (including another reproductive stage) until they are ready to enter the snail's respiratory system. Snails cough up balls of slime constantly and it's inside these that wee D. dendriticum hitch a ride. Goodbye, friend snail!

During the night ants return to their colony for safety, but those infected with D. dendriticum will instead climb to the tops of stalks of grass and latch on with their mandibles. There they will remain until morning, at which point they will climb back down the stalks and resume their normal ant lives. The ants repeat this ritual, night after night, until the ant dies or it has been swallowed by a grazing animal. At which point, well, it dies anyway. But from its slowly digesting remains emerge the D. dendriticum and with ruthless efficiency the ant-riders make their way to their new host's bile duct. Home at last!

Just a quick figure and then I'll leave you to your pleasant thoughts. Around the world 80% of humans on average have been, are now or will be the host to parasites. In the United States this figure jumps to a chilling 95%. I'm hoping that the case of head lice I had in 2nd grade and the two deer ticks I got in the woods more than a decade ago have filled up my parasite dance card. If not, well, see you guys at the pool!