The Nintendo Gamecube, not to be confused with the True-Value 2300 Space Heater which has the identical design.

New York, NY - Stupid fucking idiots across the globe were recently thrilled with Nintendo's recent unveiling of their next generation console unit, the Nintendo Gamecube. Sporting an unconventional design and below-average technical specifications, this upcoming product looks to easily capture the gaming industry's most coveted and profitable market, the stupid fucking idiots.

"Geez, this thing looks really cool," said 15-year old Brian Nilbog, a stupid fucking idiot from Huntersville, Kansas, who was recently suspended from school for "inappropriate conduct" with the science department's anatomical mannequin. "I mean, check that out. It's like purple and it's in the shape of a box and the controllers are really colorful too. What's it made out of, plastic? That's so cool!"

Due in part to the recent production of the Sony Playstation 2 and Sega Dreamcast, many speculated that Nintendo's rival product would be a bit too late to compete in such an aggressive marketplace. With a US release date of late next year, many industry analysts predicted a grave financial situation for Nintendo. However, the recent showing of the Nintendo Gamecube at Spaceworld 2000 has the gaming industry predicting a big success for Nintendo.

"Just look at how Apple was able to recover financially with the invention of the iMac," commented Steven Fischer, a consultant for New York-based TCS Enterprises. "They were financially going down the drain until they came up with a system that appealed to the stupid fucking idiot demographic... now they're a household name. The same will happen with Nintendo if they play their cards right. Seeing that the game system is essentially a brightly colored box, I don't know how they could possibly lose."

"Many developers thought that the Nintendo-64 was a hard system to code for because we made everybody jump through hoops to obtain a license from us allowing them to create their silly little game. Then, if we finally did grant a license, we charged them such an outrageous sum of money that the developers were forced to sell their game for at least $65 in order to merely break even. To top it off, the N64 had such terrible limitations on the OS, memory, and CPU speed that programmers began to curse our name in their sleep. We haven't really changed this any with the Nintendo Gamecube, but we're now using a whole lot of colorful plastic to cover up the substandard hardware inside." 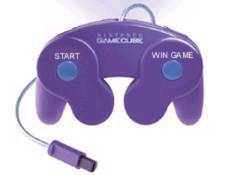 When asked why Nintendo opted to stay away from the "highest possible performance" and instead simply build something that offered "above standard capabilities", Fletcher responding by saying, "We've designed this system from the ground up to be perfect for the stupid fucking idiot demographic. Even our outlook on how it should perform is in line with their way of thinking. Our tech department said that making a system which runs really fast and has the best graphics would be 'really hard', so we just did what any stupid fucking idiot would do: make a more or less average system. This shows our dedication to the stupid fucking idiots across the world and proves that we're serious with our commitment to them."

This stance appears to be working well, as stupid fucking idiots across the globe are clamoring to know more about the Nintendo Gamecube.

"Look at that, maw! It's like a purdy purple box! Like the box the toaster came in!" exclaimed Eddie "Scooter" McDavis, a stupid fucking idiot who was recently hospitalized for drinking a gallon of window cleaner. "It's name is the 'Gamecube' and it's in the shape of a cube too! That's so wicked!" McDavis then wondered if there was going to be another sequel to "Donkey Kong 64", suggesting something that featured "them crazy monkeys having sex with each other."

The Nintendo Gamecube's unveiling closely coincides with the release of Apple's Power Mac G4 Cube, which is also in the shape of a colored plastic box. Rumors of Steve Jobs trying to copyright the cube and shutting down all websites which prominently feature boxes or cube-like entities are starting to appear on various newsgroups. How this will affect Nintendo is currently unknown.

"What we have here is an example of how the general public just wants computers to be simpler and easier to use. What's simpler than a cube?" commented Fletcher while spilling a cup of coffee all over his lap. "I mean, it's a box. People are familiar with boxes. We all grew up to know and love boxes. It's not what's inside systems these days that sells, it's how the thing looks. If we could find some way to make our systems look like a perfect sphere without worrying that our key demographic would try to use them for basketball practice, we'd do it."