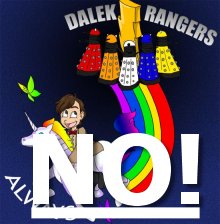 25. Give it "the little death," which consists of shooting it with a shrink ray and then stepping on it because all things are susceptible to death that way when little.

27. Have it listen to a Judas Priest record.

28. Replace its CPU with a life-sized replica of New York City that's immense weight will crush it.

30. Digitally map its head onto a video of the Kennedy assassination.

31. Make it play Contra on the hardest difficulty.

32. Have Jet Li kick it in the head in the place where being kicked kills it.

33. Tell it that conquerors of earth get to fornicate our finest women, and point to a Ford Pinto. It will stick its gun in the gas tank for some hot lovemaking, which will get even hotter when it shoots its laser load and the car explodes.

34. Alter the laws of mathematics so that there is no binary logic, causing its computer brain to do illogical things like saying that humans are good and should not be exterminated and then rolling off a cliff.

37. Hook it up to a virtual simulation of being dead, consisting of an interior view of a coffin and haunted house noises.

38. Spaghettify it on the event horizon of a black hole (requires a black hole and lethal amount of spaghetti).

39. Give it PCP until it thinks it's a 50-foot-tall neon Elvis and starts fighting mountains and glaciers.

40. Have it open a closet with an ironing board that hits it on the head.

41. Turn all the electricity in its body into wood.

42. Trap it in a Brimley Loop - an infinite-recursive logic loop contemplating Wilford Brimley.

43. Douse it with Bulgarian Miak. 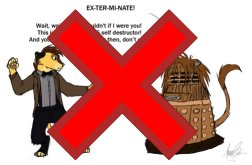 44. Throw it out of an airplane without a parachute over a Militant Parachute Lovers convention.

45. Just say "no." If this doesn't work, say it several more times, slightly louder each time. If after several minutes this is still ineffective, disregard this method.

46. Destroy it metaphysically by draining its chi or stabbing its power animal or pushing its aura off the astral plane.

47. Bury it alive, except invert the crucial 'alive' step, so you're actually burying it to death.

48. Tie a rope around its neck and the other end to a lawn chair so it thinks the lawn chair is chasing it. Lethalness unknown, but hours of fun.