Wednesday, Nov 15, 2006 by Rich "Lowtax" Kyanka (@TwitterHasBannedAllMyAccountsEver)
Mike Nelson, lead writer and star of Mystery Science Theater 3000 and more recently "Rifftrax," agreed to hold an interview with I, Rich "Lowtax" Kyanka. During this interview, I had to constantly keep my excitement in check, as MST3K was the only thing that helped me survive through high school, in addition to drugs. Mike's been a personal hero to me, and I've always loved his honest, sincere personality, in addition to his hilarious, dry wit. So yes, I am an unabashed Mike fanboy. 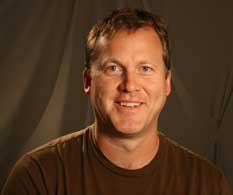 Since I am both highly unprofessional and both highly incompetent, I recorded our interview through Skype, and the resulting audio quality reminded me of something you'd hear from a CD stuck in a garbage disposal for several decades. Sure you can understand about 99% of the words flowing from Mike's robotic, muffled, metal throat, but there are additionally all kinds of weird echoes, feedback blares, and coded transmissions from other dimensions intent on invading our planet. Of course this all balances out, since I have the cracking, pre-pubescent voice of a child who has been kicked in the groin for half a decade. So please accept my apology for the terrible audio quality, and if you find yourself unable to forgive me, then remind yourself of one fact: THIS IS FREE ENTERTAINMENT, YOU BIG JERK.

Without further ado, I present to you: My interview with Mike Nelson of Rifftrax! (right click the link, choose "save as"; it's 24 megs in size)