Thursday, Jan 12, 2006 by Zack "Geist Editor" Parsons (@sexyfacts4u)
Neil and Eric Bauman have built a profitable business website from stealing and re-branding the content other people have created. Usually they do not acknowledge the creator and will actually attempt to cover any marks the creator has placed on their original work with a logo pretending to claim ownership. They have stolen the good and bad works of hundreds of individuals and websites including Something Awful, FARK and most recently You’re The Man Now Dog. The members of these sites rallied around the cause of highlighting Bauman’s totally shitty business practices. Some of the members resorted to hyperbolic threats and mentioned killing Eric Bauman or his business partner and father Neil Bauman.

Threatening to kill someone on the Internet is stupid. Hell, I get one a week on average – ten or more if “choke on a dick” counts as a death threat – but stupid people making stupid threats is part of having a website. You would have thought Bauman and Bauman would be used to that sort of thing, but no, they got litigious! Neil Bauman sent an unintentionally hilarious letter threatening legal action. When you're too old to threaten to get mommy then threaten to get the FBI Cyber Terrorism unit. Even more stupider than the stupidness of teenage Internet death threats are a couple of thieves bitching and threatening legal action like a couple of stupid stupid babies. Since death threats seem to make them cry so much and I am a lachryphile, I figured I would see what tears and moronic legal threats I could squeeze out of them.

I am going to make you eat cake until you die. I don't mean make you choke, I mean make you die from too much cake being in your blood or something. The cake won't even be very good. 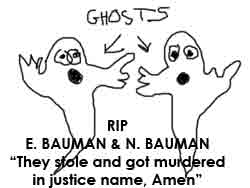 I am going to break into your house while you aren't home and disguise myself as a chair. Then I will leave before you get home, but there will be a place at your table where I was a chair and you will wonder why there isn't a chair there. Then a few days later I will leave the chair disguise on your doorstep and you will suddenly realize what has happened and you will be afraid all the time. Helter Skelter, motherfuckers!

I have elaborate plans to travel around the world altering your family's recorded genealogy to make you think you are the ancestors of a notorious slave ship captain nicknamed The Bonny Scourge. When you find this out you will probably kill yourselves, but even if you don't this secret shame will haunt you until the day you die. Which will probably be the day I kill you, because I am totally planning to kill you.

I am going to embark on a wizard's quest to recover the magical sword Crysanthenema that has the power to slay gods. I will meet new friends and heroes of the land will join me on my quest. There will be many trials and tribulations along the way. Hobbits and elves will fight by my side, from the ruins of Nogath S'hgul to the white towers of the pale sorcerer Entomamere. 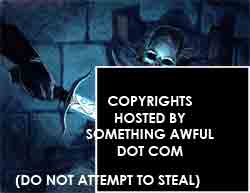 We will defeat serpentine nagas from beneath the black waters of Huskul and resist the tempting melodies of the Mare Sirens of the Lithid Heath. Even when the blackest of black, Kor, casts his mesmerizing dweomer upon our group, we will prevail. At last, we will pull Crysanthenema from the sulfurous fires of the Hellforge and drive it deep into the heart of Kor. Then, I shall hold it aloft, and wee Couscous the hobbit will take a picture with his digital camera and I shall post that picture on ebay and sell the sword with a reserve of no less than 400 dollars, for that is the price foretold by the shopkeep Don Wooly. The gold he asks for that which will bring red ruin upon your household: the boomerang that I will use to slay you both!

Every day I will take all of the money I earn writing bad jokes for the Internet and I will reinvest it in pay-to-pray churches. I will have batteries of prayers being launched to the heavens. I will employ an entire mercenary legion of the devout. Monks will tax their bended knees before the altar of god at the behest of my maxed out Visa. I will harness the astral might of the most powerful preachers and ministers who are willing to say a few words to God for a generous donation. Pat Robertson himself will prostrate on national television in my name. It will be a spiritual onslaught of Biblical proportions and all of it will be directed at you. They will not be praying for you or for your redemption: they will be praying against you! You are doomed! 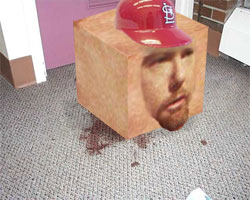 Like a black cloak caught in the midnight winds of winter I will flutter through the window of Mark McGwire's home and secret myself within his drop ceiling. Thusly concealed, I will wait for him to slumber. While he sleeps with parted lips I will slowly lower a wire down to his mouth and let gravity carry a fortune in anabolic steroids down his gullet. He will drink heartily, for the taste suits him well. By dawn he will be a cube of muscle and hate. It will take only a shove and a look at your photograph and you will have a primal destructive force unleashed in your direction. Synthetic hormones will boil his brain until he has no will, no desire, but to crush you into a meaty paste beneath his cubical body.

I will plot the murder of a random person and then confess to the police. When my trial comes I will plead guilty and request the death penalty under the condition that I be given the electric chair. While in prison I will be contacted by a demonic entity who will offer me eternal life as long as I intend to bring more carnage to this world. On the day of my execution I will request only a glass of water, for my only true craving is to slake my thirst for your blood. When the switch is pulled and the electricity surges through my body that demon will transform me into a being of energy. 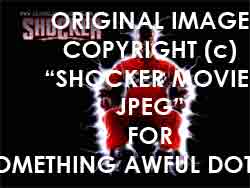 I will escape the confines of my physical shell and ride the currents through line and capacitor to seek you out. I will toy with you both, make car doors lock unexpectedly or turn the TV up to full volume late at night. I will play porn you have downloaded every time you try to use your computer and I will remove your watermark from the thousands of stolen pieces of content on your site. Finally, I will leap out from appliances and menace you with death. I will drink in your hot fear and then, with the inevitability of the rising sun, I will take your lives like a woman with press-on nails might pick up a quarter on a table.

You will burn in the circle of hell reserved for Internet thieves!