The Stupidest Articles from Slate's Matt Yglesias in 2013

Premise: It sounds like a joke, but his actual hypothesis is that because Twitter is mentioned more in rap lyrics it has a brighter future than Facebook. If you added an exotic tweak to the headline, like "Cambodian Rap Lyrics..." this would be a perfect Malcolm Gladwell or Thomas Friedman bullshit idea. 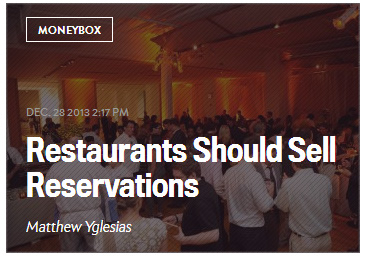 Premise: Matt went to brunch and saw a lot of people waiting and realized restaurants should sell reservations. Which of course he read somewhere else, but he has to put himself up at the top like he came up with it. Way to take credit for a fucking terrible idea, Matt.

Premise: A map showing where you can own exotic animals in the United States. The accompanying text, Yglesias's contribution, has absolutely no point.