The benevolent TV Threshold curse failed to claim a second victim: Big Bang Theory, Worst Week and Knight Rider remain inexplicably existent. However, one of this week's subjects arrived stillborn. The other proved to be mesmerizingly ludicrous, setting an endurance mark that might never be matched. 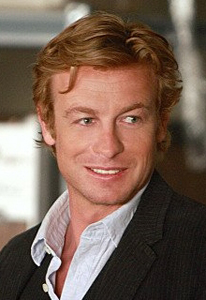 "This one's gay!"The Mentalist The title screen defines "mentalist" as "someone who uses mental acuity, hypnosis and/or suggestion." My own dictionary offers simply "mind reader." Neither of these descriptions captures the essence of Patrick Jane, a "mentalist" characterized by his asshole smirks and reckless assertions. For example, when perusing a corpse, he blurts "this one's gay," for reasons that are never explained. (Manicured fingernails? "I heart dick" tattoo?) Maybe I'm a mentalist, because I immediately deduced this show is gay. However, I stuck with it through two whole episodes, mostly because I couldn't stop laughing. I don't mind watching something terrible, as long as I'm not enjoying it for the reasons the creators intended.

In the series' opening sequence, Jane sneaks into the house of a family whose teenage girl was just murdered. He greets the father with "Did you kill your daughter?" The mom, finding her husband's denial unconvincing, promptly shoots him to death. Jane feels vindicated when they find the girl's diary, which chronicles daddy's molestations. So, everything worked out, except not for the avenging mom, who now faces lengthy court proceedings, at best. The Mentalist doesn't really stick around to clean up his messes.

Jane used to be a charlatan psychic, placating idiots with lines that sound like sci-fi fan fiction: "True demonic evil burns like fire - it burns with a terrible cold flame." But when a serial killer slaughtered his family, he decided to ditch the séance façade. Now he aids police investigators with his preternatural observations:
"Your father is a football coach."
"How'd you know that?"
"It's obvious from your whole demeanor." 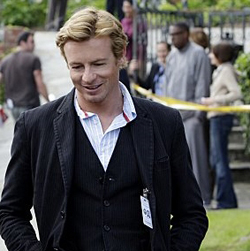 "Ooh yeah, a murder! Now is my time to shine!"Jane's techniques fall into two categories: 1) Needlessly complex mind-manipulation schemes that would never work 2) Seemingly unfounded hypotheses that turn out to be correct, without Jane having to "show his work" by demonstrating any semblance of logic. When not actively engaging in these pursuits, he skulks around crime scenes, often leering at the victim's families. Maybe there's an off-screen disclaimer during which his partners warn everyone they encounter "look, that guy in the corner's going to grin at you like a dick, and he might say some weird shit. Thing is, he's got Tourette's. Retarded, too." That's the only possible reason mourners and suspects alike wouldn't be filing a restraining order against anyone who acted this creepily.

Signature moment: In an attempt to lure a teen murder suspect out of hiding, Jane leaves a rambling voice mail message about horses going round and round. This hypnotizes the kid into visiting an amusement park carousel. If someone I'd never met left a long, bizarre message on my cell phone, I'd probably delete it long before it had a chance to settle in my subconscious and force me to do its bidding.

Suggested episode improvements: Jane's nemesis, serial killer Red John, posted a note on his bedroom door that read "If you were a real psychic instead of a dishonest little worm, you wouldn't need to open the door to see what I've done to your lovely wife and child." Jane blazes a trail of wild guesses and smug-cock expressions to what he believes to be the killer's door, only to find another note: "Dear Patrick, your lovely wife and child are actually alive. In fact, they're safe within these walls. This might seem like a cruel ruse, but we've staged this entire situation to prove your "abilities" are fraudulent. Please stop being such an insufferable prick. Sincerely, everybody." A stunned Jane spots the "perv dad" and "dead girl" from the first episode among the surprise-party revelers. The most tolerable program in TV Threshold history deserves a happy ending. 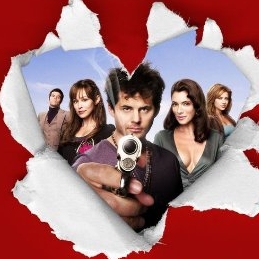 That's a 'love gun,' by the way. God, how did this show fail?When I paused the DVR after this staggering onslaught, the timer still read zero minutes, and termination was tempting. I decided I needed to evaluate footage from the current episode. I gritted my teeth through the title sequence, which involves a woman spinning in slow motion while tossing ineptly rendered CGI business cards in the air, and waited until the first real scene, which unfortunately involved two aggressively ugly people jacking each other off in the back of a bookstore. I halted this travesty when a swarthy guy, whose open-collared shirt and numerous puka necklaces identified him as the Greek god of douchebags, introduced his date to his mom thusly: "Her name is Ione. It rolls off the tongue, just like its owner." He punctuated his witticism by firing finger guns and engaging in yanking-a-lasso pantomime.

Valentine places Greek gods in a modern American setting for reasons my brief sampling didn't reveal. Apparently their exile from Olympus requires them to intervene in mortal love lives. The show's cancellation accomplished what its inept execution of this premise couldn't: It restored my faith in magnanimous interventionist deities. I remain astonished that it wasn't aborted earlier, like seconds after meeting-room conception.

Signature moment: Given the show's low-rent tackiness, it seemed amusingly apt when the sponsorship announcer prefaced a commercial break with "Valentine is brought to you by scented oil candles from Glade."

Suggested episode improvements: I'm not even going to waste my script-doctoring prowess on a program that the mighty Zeus, who presumably is, in fact, the god of discretion, already smote with a thunderbolt.