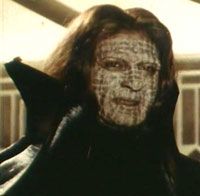 #4, Kasey Spriggs (FILE PHOTO)It's no surprise Detroit needs a face lift, and nobody can do that better than Kasey Spriggs. Although Sam Bradford and Tim Tebow vowed to stay in college, Spriggs declared his intent to jump straight into the NFL, despite being pronounced clinically dead after U of O's final 2008 game, in which he was decapitated by the goal post. During the offseason, scouts have spotted Spriggs' ghastly visage breaking school records in the 60, hitting the weight bench with a grudge, and throwing footballs through church windows and bunker walls. Jim Schwartz has had nothing but kind words for Spriggs, who broke records in passing yards, touchdowns, and advanced hay squatting. "That kid, he's a monster, a real fucking bastard ghoul," Schwartz commented as Spriggs consumed his son's sinewy flesh in front of his horrified wife. "That fucking bastard ghoul is eating my son in front of my goddamn face and there's nothing I can do about it."

The Rams need an impact player to fill any one of their numerous holes, and a powerful DT will certainly work for them. Malone may not be the biggest or the strongest lineman, but he is by far the dumbest, having tackled opposing players a record 238 times after the game was officially declared over. In one instance, Malone continued to sack opposing quarterback Tim Elroy a record six days after the game. Police called it "breaking and entering," but an enthusiastic Malone declared it "stuffing nuts into a butt, stank butt, a stank butt." Malone posted a 5.2 in the 40-yard dash, although not necessarily in the proper direction (judges counted it to be a total of 40 yards). He started only four of 13 games, but somehow managed to finish over 29 of those 13. Malone currently holds the school records in consecutive tackles during one down (eight), as well as number of curl bar weights accidentally consumed (nine for a total of 325 pounds).

Having settled on Tyler Thigpen at QB, Michael "Marvelous Mike Mitchell" Mitchell seems a natural fit. Mitchell's lanky frame (6'11, 63 lbs) gives him the ability to effortlessly slide between defenders and underneath opponents' door frames. Many safeties have erroneously found themselves confusing Mitchell with his own shadow, letting him make big plays and gently ride passing warm fronts into the end zone. "Players aint never say Mitchell beat em, they say the damn jetstream beat em, and that ain't fair no matter how you play it," recently commented OL Jack Purris. "I saw (Georgia State QB) Brett Pilfer chuck the ball to what I thought was a nimble stork's shadow, next thing I know the ball's in the goddamn end zone and I hear trumpets and shit and that's not fair either because ain't no trumpets allowed on the field during the game."

Matt Hasselbeck's got the arm, but until this draft, he essentially had nobody to throw to. Justice, who recently received his degree in Advanced Timecopping, has been described by coach Jim Grobe as "the hands-down best Time Cop I've ever met... and the second best tight end." He later clarified that statement and said he mixed up the two categories, but the sentiment remained; Justice has the raw talent and tools Seattle needs. Of course Justice is known for his famous Youtube clip where he spontaneously appears on the 31-yard line and intercepts a crucial pass from QB Matthew Stafford during the Georgia - Alabama game, thus causing both teams to lose and awarding Wake Forest a STV (Special Timecop Victory). Wake Forest currently leads all colleges in STVs, with 1.