Wednesday, Aug 09, 2000 by Rich "Lowtax" Kyanka
Ah, glorious QuakeCon. Once a year gamers descend upon the small town of Mesquite, Texas to test out their gaming skills on various people who felt the pressing need to lug 100-pound computers halfway across the globe so they may shoot pixellated guns at each other. It is the pinnacle of gaming social events, a competition which attracts enough fashion-oblivious people to bring Calvin Klein and the entire clothing industry to their knees. Yes, QuakeCon truly is the apex of human achievement, narrowly edging out talking Pikachu dolls and whoever invented the 8-track. Angela and I were fortunate enough to attend this year's convention, and we can honestly both say that it was an experience neither of us will ever forget. I have also never forgotten the time I got Meningitis in college, so you can interpret that however you'd like. 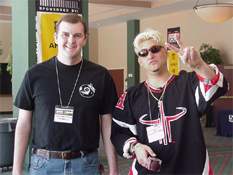 Evil Ed gets the results back from his IQ test and brags to the world about his score. Notice Redwood on the left, displaying the only facial expression he knows, "slight confusion". I stole this picture from Stomped because there's no way in hell I'd waste film on a picture of webmasters. PS: Evil Ed is really fucking cool because he dresses like a hip rock star!

When I broke the news to Angela regarding our inevitable attendance at this year's QuakeCon, I could tell she was simply thrilled. The look of confusion and horror on her face was quickly replaced with an expression of loathing and horror once I actually explained to her what QuakeCon was and where it was located. Angela isn't really a gamer in any sense of the word, and I feel her objective outlook on the entire gaming industry provides me with a perspective which I wouldn't be able to experience without ingesting large quantities of psychoactive narcotics. Her non-gamerness really shined through when I mentioned the convention to her.

ME: (jumping up and down and waving my arms like I was trying to flag down passing planes) Hey Angela! Guess what! Guess what! Guess what!
ANGELA: (getting excited) What?
ME: I've got some great news for you! This is the best news you'll hear in years!
ANGELA: What is it? Gamefan is finally paying you?
ME: Ha ha, please! Be serious! It's going to be quite a while until Hell has frozen over. No, I've got even better news than that!
ANGELA: You're going to stop playing Unreal Tournament for a while and pay some attention to me?
ME: Well yeah, that too. But my news is even more betterly good than that!
ANGELA: There's going to be a scheduled power outage in your apartment and you won't be able to work on the computer all day?
ME: Okay, please stop guessing now. My good news is that we're going to be traveling to Mesquite, Texas on the first weekend of August!
ANGELA: (face turning pale) Where?
ME: It's deep in the groin region of Texas.
ANGELA: Why are we going there?
ME: So we can be around thousands of people who are playing games against each other and trading mass quantities of porn in a large, windowless concrete room!
(ten second pause which is filled with the sound of her teeth grinding against each other)
ANGELA: I'm never speaking to you again.
ME: I don't blame you! 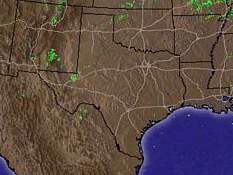 Here's a picture of Texas on a map. Notice the green blobs which are scattered around it. I think they're mold or something. Also notice that Texas is close to Mexico. That's why there's more Mexicans than Canadians in Texas.

As you can tell, the mere thought of attending QuakeCon didn't exactly elicit the positive response I was hoping for. Perhaps it was the tone of voice I used to present it or the fact that I was running around in circles and screaming while I was talking about it. Regardless, Angela was a bit hesitant to attend this year's festivities. This is the downside of being in love with somebody who comes from non-gaming circles. They tend to think that dragging a few hundred pounds of electronics across the US so you can play video games against some people who have the words "frag" or "kill" in their names is somewhat idiotic and a waste of energy. They probably don't even understand the orgasmic reaction we have to full-scene anti-aliasing. What Neanderthals! While I can't really argue with their outlook on gamers, I should point out that trading gigs of fake Brittany Spears porn is indeed a very social event which lends gobs of credibility to the whole QuakeCon function. Plus you get to see Redwood from Stomped, and carnivals usually charge up to ten bucks for something like that.

Friday finally rolled around, and we boarded the cramped and moist Delta plane which would take us to the promised land (note: I don't know what exactly was promised, but I'm sure it was just absolutely amazing). As mentioned before, I find air travel and flying to be a very interesting experience, ranking up there with talking to statues and eating Styrofoam. One of the most fascinating occurances in air travel revolves around how every time I board a plane, the airline fills the rest of the flight with people who have just escaped from a mental asylum. Our flight to Texas was no different.