Saturday, Jan 08, 2000 by Rich "Lowtax" Kyanka (@TwitterHasBannedAllMyAccountsEver)
Editor's note: While Something Awful usually has an unhealthy amount of bullshit articles that try to pass themselves off as "genuine" for the purposes of parody or satire, this review uses actual quotes and pictures from Incite Video Gaming Magazine. None of the quoted material here has been doctored or altered in any way; it is all actually in the magazine (issue #3, February 2000). Some of the content here may shock and frighten you.

Sex sells. Turn on the television and count the number of commercials and shows that try to entice you to watch them by flashing patches of skin and making Viagra jokes. Flip through an edition of Sports Illustrated and keep track of how many supermodels wearing only bikinis and sand are trying to convince you what brand margarine has the least fat. Let's face it; everywhere we look, we see tits. At least I do, but maybe I'm just lucky. 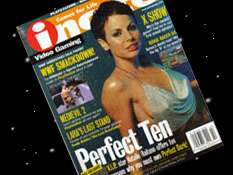 Incite Magazine tries way to hard too be the breast magazine in the computer gaming industry.

Incite has taken notes from PCXL's "Breast in the West" attitude and mutated it into some new strain of retrovirus. Pick up a copy of issue #3 and - oops, sorry, I just realized that I suggested you actually read Incite - notice how many titty shots they try to cram into this rag. Smeared across the cover of this month's magazine is a full page, seminude picture of Natalie Raitano, better known as "Breast Number 4" from Pamela Andersons's "VIP". There's an article entitled "Bif Naked" on page 32 which is apparently a vehicle to simply show pics of some slutty girl with tattoos, piercings, and tacky clothing. According to Incite, Bif Naked is "a bad-ass rock star" who "still likes to hang out in arcades." I guess this makes her qualified to have an interview in this magazine. Hell, starring in a food dehydrator infomercial probably makes you qualified for an Incite interview ("When Ron Popeil isn't using his exciting new Pocket Fisherman he's playing a few games of Unreal Tournament!"). Here's an example of the quality content that you can reap from this interview (Editor's note: as mentioned before, this is an actual quote! I am not making this up):

Incite: What do you think of female characters in video games like Lara Croft?

Bif Naked: They have the best f-in' boobs. I love that the most. I'm a big fan of boobs. I really like women in video games, I just love their boobs.

Were you able to absorb all that information? Did you understand Bif's complex diatribe? According to this in-depth interview, Bif is "a big fan of boobs." This is the kind of content readers across the world are dying to know about; does a unknown "rock star", who probably gets paid in welfare checks and bus tokens, like tits in games? The answer is a resounding "yes". I can just imagine some of the upcoming interviews Incite will treat us to.

Incite: How do you feel about nipples? Do you like to see a good pointy nipple on a breast? You know, like Lara Croft's? 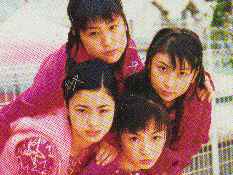 The "Official Incite Girls", two of which are 14 years old. I'm not making this up.

To tap in to the "Anime fetish" that many gamers have these days, Incite has provided "The Official Incite Girls." They are a group of Japanese teen girls, aged 14-16. I'm not making this up. What do they have to do with gaming? Nothing. What's the purpose of naming them as "The Official Incite Girls"? Probably to pull in that coveted "pedophile" demographic all the gaming magazines are fighting for these days. The girls sit in their photo shot, looking all innocent and sweet to the camera, wearing pink and sitting atop a large shoe. Awwwww, how cute... now if only some of the geniuses at Incite could Photoshop some tentacle penises flying around the place, they could grab the hardcore Anime audience.

Of course, Incite Video Gaming Magazine wouldn't be the slum it is without a shitload of Lara Croft pictures and references crammed into every page. That's the trend in computer magazines these days; dress a pair of boobs up like Lara Croft and supply the gaming population with enough masturbation material for a month. The Incite gang probably went and hung out by the bus station to find the "perfect Lara Croft model", dressed her up in a plastic shirt, and asked her to pimp their idiot magazine. There she stands on page 48, pointing a pair of guns towards the camera with the words "I heard you've been naughty" lettered across the top. In case that doesn't get you off, there's another picture of the Lara wanna-be on an ad insert, leaning against a wall as if to say "I'm a Lara Croft wanna-be leaning against a wall. Buy our shitty magazine."

If all this weren't enough, Incite has a column entitled "Bra-some Adventures" on page 91. It compares the bras from Madonna, Brandi Chastain, and Heidi Klum. I bet you're now asking yourself where Lara Croft fits into this. Well, she has comments analyzing each person's bras under their pictures. There must be some Federal law that I'm unaware of, requiring Incite to include Miss Croft, or at least a Lara reference, in every article that contains a woman. At least that's what I hope, I'd hate to think that Incite Video Gaming Magazine is simply staffed by hormonally overloaded, Anime obsessed, Lara Croft fantasizing geeks.

Adding to their "We Wanna Be Like PCXL" motif, there's tiny mini-article comparisons littered all over the magazine. You know what I'm talking about, those tiny little "humorous" blurbs that compare a game character to something non-game related, a short article that reminisces about a washed up celebrity, and other small columns that try too hard to be funny. Issue #3 sports an "Eric Cartmen vs. Eric Estrada" comparison, a half page article contrasting Tiger Woods, Tigger, S&R's White Tiger, and Tony the Tiger, and the pros / cons of Hawaii (of course with a picture of some semi-naked beach girl). Incite must have wanted enough short articles for people to read before lockdown and all the lights in their prison cell turn off.