Gracing the cover of February's issue of Incite is Natalie Raitano, who many of you may (not) know from television's latest experimental attempt to become even stupider, "VIP". She's been recruited by Incite to promote her upcoming game, Perfect Dark. Yup, the selling point of this magazine isn't the content, it's an article that is essentially one large advertisement for a game. I personally think "VIP" is a perfect representation of Incite Gaming Magazine; it's nothing more than a collection of breasts, shallow content, advertisements, and high school caliber writing. 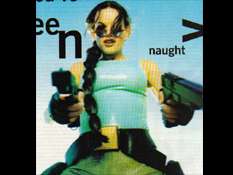 However, after reading some of the so-called "content" in this magazine, I began to find the advertisements more appealing than the actual reading material. I'm not going to even mention the 16-page Tomb Raider article in this column, I think that probably speaks for itself. One of the main features in this issue details the members from "The X Show" (don't worry, I have never heard of it either) playing a few games of Track and Field 2000 against each other. This "Celebrity Battle" (Incite Video Gaming must have a different definition of "celebrity" than the rest of us) is nonstop excitement from start to finish. You can look at pictures of the "X Show" crew wearing sports jerseys. You can find out who won the "Women's Freestyle Swimming" event (Craig). You can read about if they liked playing Track and Field 2000 (they did). Here's a prime cut from this article:

"...the show's musical director, Courtney Birch (aka the show's lone voice of female reason) shrewdly noted, 'It was cool to watch these guys play.'"

Man, she's so fucking right. I mean, the only thing I can think of that's more exciting that watching somebody play Nintendo is reading about somebody watching somebody else play Nintendo! Incite should make a special spinoff magazine that devoted to reporting on heated Mario Party battles! How thrilling! It could be called Stupid Fucker Monthly!

The crappy-ass celebrity calvacade doesn't end with "The X Crew" though. On page 80 we have a wonderful "Celebrity Review", done by Jamie Kennedy, who (according to the article) is the star of "Scream, Three Kings, and Enemy of the State". That's odd, I kind of remember the star of "Enemy of the State" being black and named "Will Smith". If you have any doubt regarding the sheer crappiness of these eighth-rate "celebrities", I've provided a few great quotes from Mr. Jamie Kennedy.

Incite: So what did you think (of Tomb Raider: The Last Revelation)?

Kennedy: It's a really cool game. It might be the best one yet, though I really have an affinity for the first one. Actually, they're all really good, but this one is just awesome.

Incite: Did you beat any of the levels?

Kennedy: No, I was just messing around, and then I'd die. It's a hard f-ing game, so it's hard to get very far. If I wasn't sliding into knives then I was getting eaten by one of the little animals. There's a lot of little things in here that kill you and you don't know how you're dying, but you're dying.

Incite: Have you ever found yourself sexually attracted to a video game heroine?

Kennedy: Oh yeah, you definitely want to bite Lara Croft's ass. She really has a plump, juicy ass - it's like a big peach. The chicks from Fighting Force are pretty nectar too.

Incite Gaming has nothing to offer people with brainwave activity. Their magazine is a printed slum of shoddy articles, unpopular "celebrities", advertisements, and Lara Croft references. While the lure of a $1.99 price tag may sound appealing to some people, you'd probably be better off throwing your money into the bushes or saving up to buy a new crackpipe. The fluff articles and relentless sex shots are an insult to any self-respecting gamer out there. If you want to read all about Lara Croft and are too stupid to figure out how to find porn on the newsgroups, I'd recommend buying Incite Video Gaming. However, if your IQ occasionally peaks above 20 and you are intelligent enough to use a toothbrush, I would stay away from this disgrace to printed media.