Sunday, Jan 09, 2000 by Rich "Lowtax" Kyanka (@TwitterHasBannedAllMyAccountsEver)
The male dominated gaming industry can be very icky at times. Many females that work in the business desperately seek to earn the same amount of respect their male counterparts receive. These women want nothing more than to level the playing field and be viewed no differently than the men they work with. "Women in Gaming" will showcase some of these females. 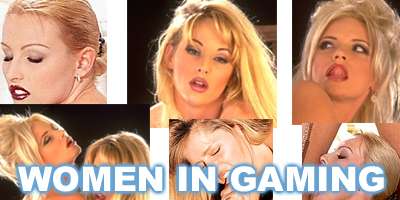 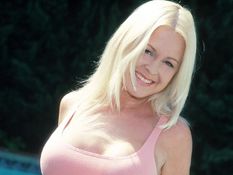 Jenni is one of the most widely known texture artists in the industry.

Jenni is one of the most popular and well-known women who currently work at Eidos Interactive. She indeed embodies the classical "Renaissance Woman" persona, wearing a wide variety of hats in each workday at Eidos. You'll never know what she'll be doing the each time you see her; one minute she'll be helping color textures for Lara Croft's newest G-string, the next time she may be in a "private" meeting with the design team. Jenni has helped turn such games as "Gex 3" and "Cutthroats" into the incredible successes they currently are. We were able to catch up with her while she was answering phones at the front desk.

SA - How did you become interested in the gaming industry?

JS - Tee hee, I didn't know much about games until I met somebody named John Romero at a bar. He looked so dreamy sitting there, his hair flowing around his shoulders like... a river or something! I walked up to him and introduced myself to him! He was handsome. He asked me what I did, and I told him that I was a student, studying because I wanted to major in communications. He said that he could get me a job at ION Storm! I didn't know what that was, I thought it was some kind of factory that made glasses. But the next morning he told me that I couldn't work at ION Storm, but I could work at Eidos! He asked me if I liked games and I said "Sure!" because I like playing "Trouble". Haha, I'll give you trouble! Tee hee! Now I work there and draw textures for games!

SA - What are your favorite games?

JS - I LOVE Tomb Raider because Lara Croft is a fabulous role model for girls! She shoots guns, explores, and is a real role model in every way! She proves that a strong woman character can be just as popular as a man! Look at all the people who bought Tomb Raider! I am proud to work at a company that treats women as equals to men and respects women for their accomplishments.

JS - I LOVE working for Eidos! They always want me to take pictures of me for the press because I'm such an excellent texture artist! Then magazines and online websites want to write about me because they're genuinely interested in helping the females of the online gaming world!

SA - That's for sure. Did you know that whenever we run a "Females in Gaming" piece, we get double the amount of hits?

JS - WOW! Really? That is SOOO neat! That must mean that the public honestly cares about women gamers and love reading about us! That makes me very happy. Grrl power!

JS - John thought that me taking that movie part would be a good idea because then more people will know about me and grrl power! Now the rest of the world will know about all the big, long, hard work I do every night!

Thank you for the interview, Jenni!