It's been a long time since I last wrote a note to you and slid it out from under my bedroom door. I know things have been tense between us in the past, which is why I spent the last two years in my bedroom, emerging only to restock on essential supplies from Walmart. I even got that camp toilet so I wouldn't make the bathroom smell like "a Hadron Collider for soiled diapers and rotting fruit," as you put it. Typical Jerry, throwing out insults and not realizing they make you look uneducated.

When you called me a "No-belt Prize Winner" when my sweatpants kept falling down, you made yourself look like a fool. It's called a "Nobel Prize" and they don't give it out for losing weight. You should have been supportive because the weight loss was due to parasites, Jerry. But don't worry, because I've found the right balance of food to feed both myself and the parasites. My sweatpants fit tightly again.

I have learned not to take offense to your callous words, because I know they come from a place of fear and envy. A place that makes you look stupid.

But, Jerry, let's get to the point of this letter. 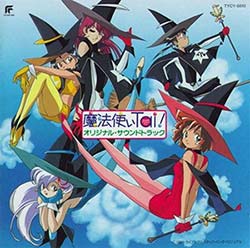 I know you want what I have, and deny yourself it every day. We both know what I'm talking about: anime. You resent me because I am the gatekeeper to amazing worlds beyond your mundane world of law school. I am the one who can open the door and show you the amazing world of Gundam or Macross Plus. And it is me, Jerry, who can bring you to tears sharing the sublime beauty of Serial Experiments Lain or Magic Users Club. We both know I have all the power in this relationship.

I had a dream, Jerry. This isn't like all the other dreams about you I've spent hours discussing with my therapist. This one told me it was time to break the silence and finally extend an olive branch. I've hurt you enough. You need me to be your step-brother again. Heh... it wasn't always easy to accept you as my brother. You were rude and vengeful, and I felt less like Miki Koishikawa in Marmalade Boy or Ema Hinate in Brothers Conflict, and more like I was living with Sesshoumaru from Rumiko Takahashi's InuYasha.

Jerry, in this dream you died. But that was not the end. It was the beginning. I revived you through mouth-to-mouth resuscitation, breathing my life into you. You awoke again, struggling to catch your breath and refill your lungs. You turned to me and spoke. Two words I will forever cherish, dream or not. "Anime. Now."

In that instant I took your hand and guided you into my room. I sat you on the closed lid of my camp toilet, and you stared at me wide-eyed and full of wonder. Then I showed you my anime. All of my anime. I spoke of the DVDs I imported in Japan, of fansubs and the fansub community, of my figurines and wall scrolls. You cried with joy and thanked me, as if seeing art for the very first time.

Then Jerry we were older, you and I. We had spent years watching anime together, from lighthearted Love Hina to the gritty future of Satou Tetsuo's Martian Successor Nadesico. We both got very muscular, and the skin on my thighs was healed and no longer dead. Finally, Jerry, we found our common ground and common language: the language of anime. 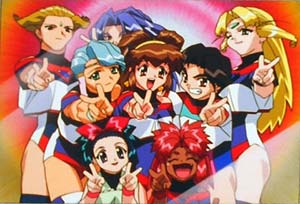 But dark clouds came, for it was time for you to be tested, Jerry. Your "bros" came to lure you back to a world of sports and stupidity, calling you out to come have some "wings" and "brews." You told them the only athletic competition you cared about was Battle Athletes Victory. And Jerry, you spoke with the voice of Kawakami Tomoko, a voice you took on permanently because it better reflected your personality. You also dressed like her, because in this dream the shackles of gender were destroyed by the transcending beauty of anime.

You passed the test, Jerry. That's when I knew for sure you were mine.

Then, Jerry, we were watching the anime of the future, where characters familiar and new explored topics and frontiers man had yet to devise. Suddenly, Jerry, we were both very old. I was like a wizard, wizened from a lifetime spent enjoying the finest art. As your mentor, I felt overwhelming pride having led you out of the darkness and into the bright, welcoming light of anime. 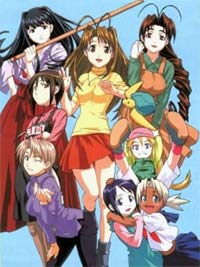 Knowing my mission was complete and I had taught you everything, I felt the end approaching. It was a peaceful feeling, Jerry, even though you raged against it. You begged me to hang on, pleading that there was always more anime to watch. "No, Jerry" I said. "It's time, Jerry."

Then I drew my last breath and prepared to ascend to the new stage, where my consciousness would run free, separated from the weakness of the body. The necrotic flesh of my inner thighs, the diabetes, the parasites. I would be whole amongst all my favorite anime characters. I would be welcomed to a table with the likes of Meryl Stryfe, Ryoko, Reinhard von Lohengramm, Black Jack, Miaka Yuki, Sylia Stingray, Liu Mao Hsing and a hundred other unforgettable names.

You cried and tried desperately to revive me, performing mouth-to-mouth resuscitation as I had once done for you. After each breath you breathed into me, you would yell the name of an anime character to show me how much you had learned. "Gohan, son of Goku, father of Pan!" you shouted. "Vegata, father of Trunks and Bulla!"

You were my best student and I was your Great Teacher Onizuka. You learned the histories and the lineages, you knew the characters and could recite their names and the names of their inspired creators. I was proud of you, Jerry. You were more than a step-brother then. You were my best friend and soul mate.

That was my dream, Jerry. That is my dream for us. I saved your body from dying, then saved your mind from a lifetime of mediocrity. You owe me now, Jerry. You owe yourself.

The journey of a thousand animes starts with a single step. My door is unlocked. Your seat is waiting. Fulfill your destiny.