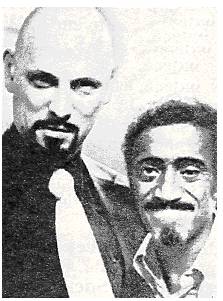 In addition to the following forum highlights, you can find discussions on Terry Pratchett, Stephen King, China Mieville, George RR Martin, poems, and the random E/N deitrus of the bookworm world.

I can't wait to get together with my friends so we can shout our favorite quotes at each other.

Trusted SCiFI Review Sites
Hovering at zero replies, the truth is out there.

Something Awful Book Club October - House of Leaves by Mark Z. Danielewski
Have you been ignoring House of Leaves to moulder on your shelf safe in the knowledge that no one else really waded through the first chapter either? Find a different book to keep your table from wobbling because the SA Book Club is going to tackle Danielewski's debut novel.

Random stories you love that others might not know about...Intrigue us!
A hodgepodge of interesting stories. Add to the discussion with your own treasured offbeat find or spin the wheel and take a chance at discovering a new author.

Let's recommend plays to each other (and maybe argue about them)
Remember plays? They were those things that people wanted to be seen coming out of before art movie houses were built.

The Essay Appreciation Thread
If your interest in the art of essay writing was in the form of creative word counts and figuring out the widest possible font to hit the class requirements, then this thread probably isn't for you.

The Office - "Dunder Mifflin Infinity" at 9pm - Has The Office jumped the shark? The debate rages on in this thread about the episode from last Thursday where Michael drives his car into a lake. Better put on your flame suit for this one, boys.

Who's obsessed with Family Guy? - All NeonFire372 wanted to do was talk about his favorite show, Family Guy, with fellow Family Guy fans. Instead he got mercilessly mocked by people who probably had Stewie Griffin avatars three years ago

Cavemen - premieres on ABC -- Tuesday 10/2 @ 7pm CST - Surprise, everybody hates the show based on those GEICO commercials about the cavemen. This doesn't bode well for the Erin E-Surance show Adult Swim is premiering next year.

Tin Man - God Damn It, It's Real. - Oh my god the Sci-Fi Network greenlighted a "bold reimagining" of The Wizard of Oz where characters refer to Oz as "the O.Z."