Before the game gets under way, a brief tutorial comes up and cheerfully demonstrates the ins and outs of a godawful control setup that puts Ehrgeiz’s godawful control setup to shame. If you thought Kabuki Warriors was a pathetic fighting game for only having one attack button, you ain’t seen nothing yet. Rise to Honor features a whopping ZERO attack buttons! That’s right, you don’t press buttons to attack at all! You simply push the right analog stick in the direction you want to attack, and Jet Li will decide whether he wants to do a punch, a backwards girly slap or a strange little twisting ballerina kick. The control scheme, which consists of a “move” joystick and an “attack” joystick with an occasional tap of the shoulder buttons, leads me to picture the head developer stammering “Well, uh, it worked for Smash TV” before screaming “FOR THE LOVE OF GOD, INSERT MORE RANDOM WEAPONS!” and then choking to death on his own drool.

Warning: When cornered, Jet Li's enemies can become dangerously funky.The demo opens with a riveting cutscene in a restaurant that shows a guy at a table arguing with his boss, probably over the proper procedure for operating the milkshake machine. While they scream at each other in their quaint language, some jerk in sunglasses walks into the restaurant and guns down two fat people in suits. Jet Li, concerned for the safety of the remaining fat people and their suits, yells at the guy next to him to “get Boss Chiang to the boat!” and then runs away before the guy can explain that he doesn’t have a boat. The gunman, who apparently decided to shoot two people and then stand there for several seconds doing nothing, is thwarted when Jet Li heroically kicks a chair in his direction and delivers a flying shin to the face while the gunman is recovering from the shock of having a chair slowly bump into his leg. Three other gang members materialize (they don’t come from anywhere in particular, they just magically pop into existence next to the door and run inside) and since the gunman and his guns seem to have blinked out of existence for some reason, Jet Li prepares to engage the enemies in some incredibly sloppy hand to hand combat. 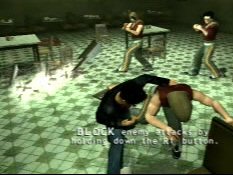 Jet Li brutally slams an enemy's head into nothing while a nearby table inexplicably explodes.The one fun thing about this game is the interactive environment, which lets you throw chairs at people, bang people’s heads into walls and tables, and use a bunch of different random objects as weapons. They spent way too much time on this feature that could have been better spent incorporating advanced features like “pressing buttons” into the game. The only button you’ll ever need to use is R1, since holding it makes you invulnerable to just about every type of attack and you can perform grab attacks while blocking. Once you grab an enemy, you can throw him at the others to make everyone in a ten-foot radius flail their arms and fall down, or if you feel like it you can just stand there clinging to your new friend for as long as you want. By standing there holding R1 and grabbing enemies when they come close, you’re pretty much guaranteed to kill every enemy in the room without taking a single hit. And if you try to punch or kick you will discover that Jet Li seems to have been trained in the “not touching, can’t get mad” school of martial arts, or perhaps in professional wrestling, since the enemies fall over and take damage even when an attack blatantly misses by three feet.

After fighting two sub-bosses, a guy on a motorcycle who drives through the window for no reason and a big fat egg-shaped man who attacks you in a hallway with a slippery floor, you come to the second stage of the demo – the running away level. This level one-ups the fighting level by requiring you to only use ONE joystick and a button. When Jet Li walks into the next room (I have no idea why he wants to explore the restaurant instead of leaving) the main bad guy opens fire on Jet Li with a pair of blocky Mac-10’s while laughing hysterically. But fortunately for Jet Li, Captain Lol appears to have some kind of degenerative shoulder condition that prevents him from rotating his arms more than one degree per second. As a result, our fearless restaurant explorer has plenty of time to run across the room ahead of the bullets, pausing occasionally to hit R1 and jump over a table or a weeping bystander. Once you make it to the other side, the bad guy’s guns run out of ammo (after firing about 2,000 rounds each) and he throws a temper tantrum and storms out of the room. 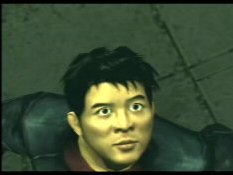 Jet Li looks confused. Maybe it's because his cheekbones are trying to chew their way out of his face.After beating up an angry chef and kicking through a window that bullets can’t break, you find yourself in the third and final stage of the demo – the shooting level. This is by far the least painful of the three, since it actually lends itself to a one-move-joystick-and-one-attack-joystick scheme. Moving and aiming feel pretty natural, although the tacked-on “bullet time” feature that makes everything blur and slow down is even worse here than in the opening levels. Unfortunately there isn’t an ounce of strategy involved, since the enemies miss every shot by a good two or three football fields. Since you have infinite ammo, your best bet is to simply race through the alley firing randomly like a spaz. Once you reach the end of the alley, you drop your guns (again, I have no idea why) before spotting the main bad guy climbing up a building and then half-climbing, half-floating up after him. After a short cutscene in which the bad guy’s evil twin shows up and they both start going through random poses, the game title pops up and the demo unceremoniously ends.

And since SA is a site dedicated to hands-on learning, I have risked my life to provide you a documentary of this upcoming smash hit! I leave you with exclusive video footage of Jet Li’s amazing restaurant adventures.

Jet Li wreaks havoc with his signature move, known in wrestling circles as the Mandarin Helicopter.

The enemies suffer a humiliating defeat at the hands of Bowling Pin Physics.

A riveting cutscene, followed by a grueling sub-boss battle.

The second sub-boss, who I fearlessly molest to death.