Obese City, submitted by me.Truth be told, Jim, the 34 year old music student from Salem, Massachusetts, loves obese men. I mean, he really digs them in a manly, criminally homoerotic way. Obese City is a site that makes me want to never eat again and hide in my closet crying. The front page is adorned with whimsical MSpaint images of "superchubs" as Jim calls them. These colorful drawings that look like they were crafted by a retarded 8 year old depict horribly obese men in seductive poses, with charming tales of their sloth. Obese City really treads on my corns when they depict Laurel and Hardy as a gay couple. You do not bastardize Laurel and Hardy! My personal favorite is the fat cop, because cops do eat a lot of donuts, am I right?

Also included on Obese City are 3 thumbnail pages of only highest quality, shirtless obese men. Some of the men are naked, but you can't see anything because their belly hides their naughty bits. But the real gem of this site is story under the "Fiction" menu called "The Big Al Special". Since reading it, it has haunted my dreams and makes me wish I was a stillborn baby. The horror. The horror. 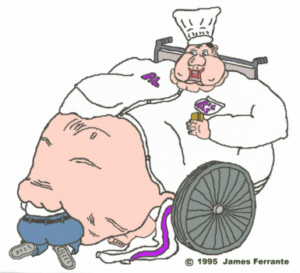 WHAT IS GOING ON HERE?

So, Mr. - ," he said. "Mr. Evans. Michael Evans," I said. "You're here to collect your prize for eating all of my special." "Yes, sir," I said as I stood mesmerized by his enormous presence. "No customer has enjoyed my cooking more than you have, Mr. Evans. Well, maybe except me," he said. We both laughed which broke the tension. "I've got your prize on me if you want to come closer so I can give it to you." I nervously approached him as he gently guided me next to his wheelchair. He pulled me tighter toward him so my bulging cock was pressed against his shoulder. He put his chubby hand on my bulge and began jerking my cock. Then he put his other hand on my swollen belly and rubbed it. "I loved your burgers and fries," I said while getting the hint that he was gay and loves to feed his boyfriends.

You know, I believe in freedom of speech and being allowed to express yourself and all that shit, but this is just going too far. It's promoting unhealthy obese people to gain more weight and hope to get on Maury Povich, and that's just not cool, especially since I am spending all this time now trying to get people to lose weight. Let Jim know how you feel about Obese City on the guestbook, and please try to do something original. Like spam pictures of Richard Simmons 1,000 times.