At a Glance: A remarkably bad attempt at cashing in on Quake 2's popularity, Canopy Games' magnum opus definitely represents some kind of significant achievement in terms sheer crappiness but really not much else. 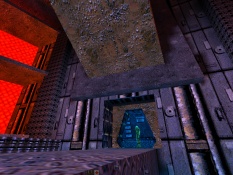 These textures have been run through Paint Shop Pro's "rusty metal" filter enough times to qualify as the only serious amount of work that went into Juggernaut.

First of all, I'd like to state that Quake 2 is my favorite game in the universe. I have over 1,000 simulated hours of strogg combat under my belt, and since 1998 a small portion of my brain has been designated as an imaginary game server where id software takes on the Transformers in an epic team deathmatch that I can see whenever I close my eyes. In between thinking and dreaming about Quake 2 I have also tragically played through 95% of the horrible custom levels available for the game, which is definitely a testament to either my love of Quake 2 or my masochistic tendencies. For the sake of completeness I knew I had to play the Juggernaut mission pack.

A joint venture between Canopy Games and the forces of hell allowed Juggernaut to ship a mere 2 months after the release of Quake 2. If this was just another run-of-the-mill bad game I would simply dismiss it as needing more work and maybe a few snowboarding levels, but in Juggernaut's case the imposed two month deadline was actually a blessing, as there is nothing in these 26 maps to indicate that the developers were striving to create anything but pure evil. Incidentally, most of the game's $100 development budget went towards buying kittens and promptly torturing them to death in front of horrified children at the local mall.

I liked Juggernaut for Quake 2's title because it succinctly conveys that the mission pack is called Juggernaut and is for Quake 2. After that it was all downhill, though. The substandard level design comes off looking like the future as envisioned by people from the 80's, or possibly the 80's as envisioned by people from the future. If Juggernaut wasn't made by inhuman motherfucking cyborgs I'd probably go into a speech about how just because a game has a sci-fi theme doesn't mean it has to look like a bad Full Moon Pictures rip-off of Alien. Instead I guess I'll discuss the new weapons and enemies.

Haha, just kidding. Juggernaut doesn't have any new weapons or enemies. Just so this paragraph isn't a total loss, though, here are some of Canopy Games' edgy reinterpretations of Quake 2's stock models. These, sadly, are all too real.