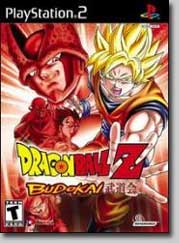 At a Glance: I’m probably not the right person to write this review, since I just don’t get Dragonball Z. Despite being the smartest person in the entire universe, I am unable to comprehend how this show has stayed on the air for this long, how it has such a large army of adoring fans despite not making any sense whatsoever, and how the creators of the show are able to go out in public without having a wide assortment of heavy things thrown at them. The few times I’ve seen it, it appeared to consist mostly of strangely proportioned anime characters with 400 pounds of muscle flying through the air throwing flashy colored balls at each other, each of which destroys an area the size of Montana while somehow failing to harm the person it explodes next to, accompanied by dialogue primarily composed of exaggerated grunts and incoherent screams. But don’t worry, I wasn’t about to go into this review without doing any research. I work at Gamestop, so a few days ago at work I stared for upwards of five seconds at the cover of a magazine that said it had information about Dragonball Z in it. Having done this, I now consider myself a wisened Dragonball Z expert who is fully qualified to warn the world about this unbearably shitty fighting game.

Playing this horrible game confirmed my suspicion that the majority of the Dragonball Z fanbase consists of hyperactive 12-year-olds who watch the show while bouncing around on the couch and downing bowl after bowl of Cookie Crisp cereal covered with sugar and crushed Ritalin pills. This is because in order to make any sense of the spastic jerking motions and 20-words-per-second dialogue that comprise the series, the blood vessels in your brain would have to be so constricted from caffeine that a moderately stiff jab to the temple would cause your entire head to explode in a gushing shower of blood and brainjuice. So they designed a game in which the players wouldn’t have to deal with things that exceeded their microscopic attention spans, like “hitting more than one button," or the laborious “using the attack buttons in a particular nonrandom order” task that so many other fighting games require.

This realization made me curious about the capabilities of an average Dragonball Z fan, so I headed over to a reader review site. The reviews that I saw horrified me, not only because there were people who actually thought this was a good game, but also because the sheer volume of spelling mistakes suggests that most of them entered their reviews by standing across the room and throwing furniture at the keyboard. 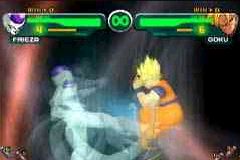 All of the screenshots for this review were taken from the official DBZ Budokai site. Yes, that's right, looking at this screenshot is supposed to convince you to buy the game. I'm not sure how Infogrames thought that would work.

This game is one of the best figthing video games that I played so far. You people should be very happy that this game for PS2 came out. So just be happy and shut up!

gamestopstoremanger this game kicks a$$ it was one of the hottest sellin games where i live so if u r a store manager u really sux at ratein games dumba$$.... u should be replaced at your store u numbnuts..... or should just quit cause u can't rate a game worth of sh*t...

To me (a die hard fan till the end) the sounds were so acurate it gave me chills. I mean if someone were in another room they would think the show was actually on. this aspect of the game was as dead on perfect as it could have been(except for how fast they speak when pulling of moves like the kahmeahmeha wave it sound like its in fast forward) But overall It still kicks @$$...DBZ FORERVER!!! !!! !!! !!!

That right there should give you some idea of the demographic that Dragonball Z products are aimed at. Seeing these reader reviews frightened me, because I realized that any game that appeals to this kind of person would undoubtedly have a devastating effect on the non-weird-Japanese-cartoon-watching members of society. But despite this risk, and the risk of being called such harmful things as ‘dumba$$’ and ‘u numbnuts’, I somehow forced myself to put this game into the PS2 and fire it up. As you can probably tell from reading this first page, the result was not pretty. 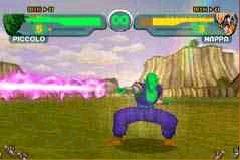 Here we see the mighty warrior Piccolo striking fear into the hearts of his enemies with his dreaded Abnormally Long Purple Slinky Of Death.

I started up the vs mode, hoping that the game would be at least playable. Sadly, my hopes were quickly dashed upon the sharp jagged rocks of reality, and the only reason I didn’t immediately run out the door and jump into oncoming traffic was because then I wouldn’t be able to make any more clever analogies like the one I just made. Just by playing the vs mode, I ran into a nice big doggone bad ol’ bunch o’ problems. For one thing, you can only avoid enemy attacks by blocking, since you can’t jump or duck and the ‘sidestep’ feature just makes your guy slowly shuffle approximately half a millimeter to the left or right. But keeping yourself from taking damage is still incredibly easy, because pressing an attack button causes your character to stand still and ponder the order you’ve given him for a few minutes before he gets through his busy schedule of standing there motionless and actually does something. And it’s not like you’re going to have a wide, varied offensive arsenal to protect yourself from, since each character only has eight or nine moves.

And if you think you can improve the playing experience by switching around and using a wide variety of characters, you’re very wrong. Pretty much every character in this game is the same. I don’t know why the developers didn’t see this as a potential problem with making a game based on a show where every single character is a superpowered magical space warrior from Neptune. The big characters are just as fast as the small characters, and even the characters who are three feet tall are capable of punching people 40 feet into the air. And just like in the show, everybody has a variety of weird fireball attacks, only with some characters the fireballs are yellow and with others the fireballs are purple or orange.

Also, for some theoretical reason (the word ‘theoretical’ indicates that I am not convinced there even is a reason), whenever you knock somebody high enough into the air they don’t come down. They stay trapped up there while your guy slowly floats up to meet him, at which point you continue running around, blocking, kicking and punching exactly as if you were still on the ground. I suppose this was done to capture the white-knuckled excitement of the show’s fighting scenes, but at the sight of two people standing 20 feet off the ground running back and forth and knocking each other down onto an invisible floor that they seemed to be standing on, I immediately collapsed onto the floor and burst into a fit of kidney-damaging laughter. So the air-fighting in Budokai didn’t turn out to be ‘exciting’ so much as ‘hilarious in a hopelessly sad way’, which I don’t think was the mood the developers were going for.