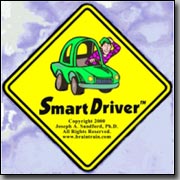 At a Glance: The problem with most modern car games is that they aren’t educational enough. I mean, sure, it’s fun to fire a barrage of 20 homing missiles across a crowded freeway at a homicidal clown in an ice cream truck, but that isn’t really a skill that you can apply to real life (unless you live in Los Angeles). We’ve all spent years yearning for a video game that will teach America how kickass it is to obey the speed limit and brake for pedestrians. Well, it’s time to rejoice, because our yearning has been answered in the form of "SmartDriver." I can hear the development team behind Gran Turismo 3 quivering in fear already.

BrainTrain has designed a powerful menu system that allows you a wide variety of choices, including “running SmartDriver” and “clicking on something else to see if there’s anything you can do besides run SmartDriver even though there isn’t.”

I’ll be the first to admit that I’m a horrible driver. I come from southern California, an area where you will commonly see an entire freeway full of bumper-to-bumper traffic going 75 miles an hour with other cars five feet away on every side. Every time I merged onto I-15, I had to spend the entirety of my time on that freeway scanning the road for idiots who cross freeways on foot, random debris in the middle of the road, things that are on fire, and idiots who cross freeways on foot while carrying random debris that is on fire. When I moved to Washington, I was naturally quite surprised that people up here limit their speed according to numbers on weird little white signs along the side of the road, and stop at intersections according to the whims of a little dangling group of round lights. I still haven’t been able to adjust. I’ve gotten so many traffic tickets that USAA representatives keep an eye on me constantly and begin raising my rates as quickly as they can whenever I get within 50 feet of my car. So when I saw a link to download “SmartDriver”, I figured I would go ahead and download the trial version. After all I’ve always aspired to be either smart or a driver, and here was a title that could grant me both wishes! I installed the game and prepared to erase the bad habits from years of California living, and turn myself into a speed-limit-following, turn-signal-using, ace Washington motorist.

Things started to turn sour when I noticed that the splash screen consisted of a creepy French guy wearing a striped purple shirt and a bright green beret, which was the exact same color as the deformed beetle he was driving, while 70’s porn music played in the background. The sourness increased exponentially when I saw the “green on whatever-your-default-window-color-is” color scheme, and the fact that the main user interface window appears to have been designed by 10th-graders taking an ‘Intro to Visual Basic’ class taught by a disgruntled laid-off Boeing employee. Apparently the designers believed that a faint green color could be mixed with a dull yellow and light blue to form an attractive, eye-pleasing color scheme.

When I foolishly clicked on the ‘BEGIN EXERCISE’ button and attempted to play the game, my entire body filled with so much bile and stomach acid that the pH level couldn’t be measured without one of those fancy calculators used to calculate infinitesimally small values for quantum physics. The creators of this game somehow managed to steal the code for Spy Hunter and use a complicated extraction process to remove all traces of fun and enjoyment. I know it’s supposed to be fun and educational, but it’s about as successful at doing two things at once as a guy in the driver’s seat who says “Quit whining, I can drink and drive just fine!” before pouring his beer into his lap and slamming into a telephone pole at Mach 2.

Now, I know it’s possible to create computer programs that simulate real driving. I remember having software like that back in driver’s ed that we used when we took a break from watching videos of teenagers who crashed their cars and had their entire bodies turned inside-out by the impact. I remember the driving simulator we used having WHOA! 3d graphics and DUDE, NO WAY! sound effects that didn’t sound like they were beeps generated by a two-line QBasic program. So when I started up the SmartDriver exercise, I eagerly waited to see what kind of super-hi-tech driving software had been created in the years since I’d been to driver’s ed.

It’s bad, folks. Bad. Bad bad bad bad bad. For one thing, I understand having a regular PC car racing game being controlled by the keyboard, but I don’t get how BrainTrain thought this game would be a good training device for drivers when all they have to do is sit there and occasionally tap one of the arrow keys. You get one penalty point every time you go above the speed limit, and one damage point every time your car runs into something, and you fail the test if you get too many of either. But it takes fewer penalty points than damage points to fail you, meaning you get penalized more for a half-second of speeding than you do for plowing into a boulder. I think they could be trying to tell future drivers something along the lines of “Don’t inconvenience the police by speeding, it’s better for you to just slam your car into an immovable object because that way instead of inconveniencing someone else you’ll die and quite frankly you deserve it”, but maybe I’m reading too much into that.