Onslaught of the Juggernaut

Intrepid reviewer Jed "Jed" Jed has taken some time out of his busy schedule of being Jed to review "Juggernaut" a Quake 2 Mission Pack that was created roughly five minutes after Quake 2 was released. If that sounds like Canopy Games took the time to make sure they got everything right then you must have been very pleased with the launch of Anarchy Online! Head on over and inspect their wonderful work! 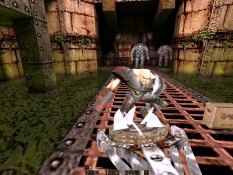 A joint venture between Canopy Games and the forces of hell allowed Juggernaut to ship a mere 2 months after the release of Quake 2. If this was just another run-of-the-mill bad game I would simply dismiss it (with the requisite gay little hand gesture) as needing more work and maybe a few snowboarding levels, but in Juggernaut's case the imposed two month deadline was actually a blessing, as there is nothing in these 26 maps to indicate that the developers were striving to create anything but pure evil. Incidentally, most of the game's $100 development budget went towards buying kittens and promptly torturing them to death in front of horrified children at the local mall.

If that doesn't entice you to go on ebay and buy a copy of the game, then maybe reading the entire review will!