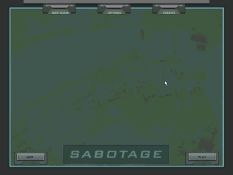 At a Glance: Have you ever wanted to run around in a sewer while shooting hordes of identical bad guys? I’m sure people wanted to do that kind of thing ten years ago, before running randomly around a maze of hallways joined “fat guy with rocket launcher”, “air vent opening near locked door” and “explosive barrel next to a tightly-packed group of enemies” in the proud ranks of the world’s most infamous game design cliches. But nowadays most budget companies won’t even sink that low, unless you count the poor bastards at Midway who made Mortal Kombat Special Forces. This two-level demo manages to slap together enough horrible, overused cliches to put Fark to shame while simultaneously failing to incorporate concepts that even budget developers manage to include, such as “not automatically exiting when you die.”

Publisher: None yet. I assume this means the developers haven't quite raised enough money from mowing lawns to afford cab fare down to the Valu-Soft offices.

First off, all of the Taylor “Psychosis” Belloholics out there might notice that this is not actually a full review. This is because I moved out of my old apartment this week, so naturally I’ve spent the last several days driving around 40,000 boxes of crap I never knew I had, not to mention unsuccessfully trying to fight off the alien force that flew to earth in the form of black crap that is impossible to scrub off and then proceeded to invade my bathtub. Moving out of my apartment in Renton also gave me the opportunity to call Comcast and upgrade from their standard “Pay us for a full year and over the course of that year we’ll give you a total of eight or nine days of functional service” package to the much more feasible “Don’t pay us anything and you will get roughly the same level of service, wait a minute, why is this even the name of a package” package. As a result I haven’t had enough time to write a full review, but I decided I’d still warn everybody about this terrible demo after rambling for an entire paragraph about moving or boxes or aliens or whatever the hell I was talking about. 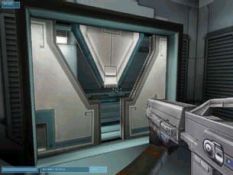 Oh no, this door is locked! Oh, wait a minute, there's an air vent right over here that just happens to lead to the other side! What are the odds?

The link to this demo was sent to me by the same jerk who sent in Demon Massacre, so I had prepared myself to experience exceptionally high levels of what we in the industry refer to as “not goodness.” However, I made the mistake of assuming that there wouldn’t really be anything bad about the demo until the game itself started. I discovered that I was wrong (which occurs remarkably often but still manages to surprise me every single time) when I saw the terrible menu. It’s not terrible because of the huge amount of wasted space, or because the background image looks like a slab of dirty sheet rock covered with fungus and mildew, but because the cursor on screen can’t keep up with the physical movements of your mouse. It constantly lags behind while chugging in the general direction of your mouse movement at around five frames per second, and I admit I’m very curious how they pulled off such a bad framerate when the only thing animating on the screen is the mouse cursor. 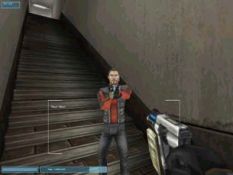 These fearsome enemies slowly stumble around shooting at you until they empty one clip, at which point they stop trying to attack you and simply wander aimlessly around the level until you kill them.

Not surprisingly the control and framerate problems persist throughout the gaming experience (Sabotage is a “gaming experience” in the same way that drinking poisoned kool-aid is a “thirst-quenching experience”) but it took me a while to find that out due to the ungodly load times. After staring at the ugly load screen for a good two minutes or so, I appeared in a sewer, which was actually just a crude series of linked hallways that were supposed to look like sewers because the floors were wet. The sewer system is sparsely populated by strangely farsighted enemies who can hit you a pretty good percentage of the time when they’re far away, but miss every single time from up close.

The second demo level is exactly like the first, only it takes place in a building with slightly larger rooms and slightly drier floors. Sadly these large rooms are too big for the game’s engine to render in their entirety, but I must admit the use of distance fog indoors is a fairly innovative trick that other developers haven’t used, mostly because it looks really stupid. The second level also showcases another recycling of the Retarded Suicidal Civilian character. The RSC is most commonly seen in games like Virtua Cop, and you can recognize him by looking for a civilian that jumps up right in front of you in the middle of a gunfight and flails his arms around shrieking “Don’t shoot me, don’t shoot me!” The RSCs in Sabotage have the same annoying habit of standing in the hallway right in front of an enemy, who can shoot all he wants without having to worry about hitting the civilian, but if one of your bullets flies within 20 feet of the guy he’ll instantly slump over and die. In Sabotage, if you kill two civilians your supreme overlord guy decides your mission isn’t really that important and kills you.

I would offer a more in-depth review, but I’ve barely gotten any sleep recently and the few functioning neurons left in my brain are currently splattering against the inside of my head, trickling down the interior of my skull and dribbling down my spine. Feel free to download the demo and give it a whirl if you don’t believe me, but be warned: when you die, the game will automatically exit. This means you will have to start the game back up and sit through the atrociously long loading screen every single time you die. To counteract this problem, I recommend employing the tactic of “not playing.”