At a glance: Longtime readers of this site may remember that I got my start on Ye Olde Somethinge Awfule writing for Cranky Steve’s Haunted Whorehouse, a section dedicated to exposing some of the terrible fan-made first person shooter maps that pollute our beloved internet. I eventually escaped from the Whorehouse using a daring escape plan that involved my hand and the doorknob, but this terrible demo helpfully reminded me of my time in Steve’s magic van by cheerfully overusing the most annoying mapping gimmick known to mankind – colored lighting. The sheer amount of bright, flashy, annoying color in this game could only be recreated by playing Rez while wearing colored contact lenses next to an exploding Skittles factory.

Developer: Ventelation Studios
Publisher: None. For this I will always be thankful. 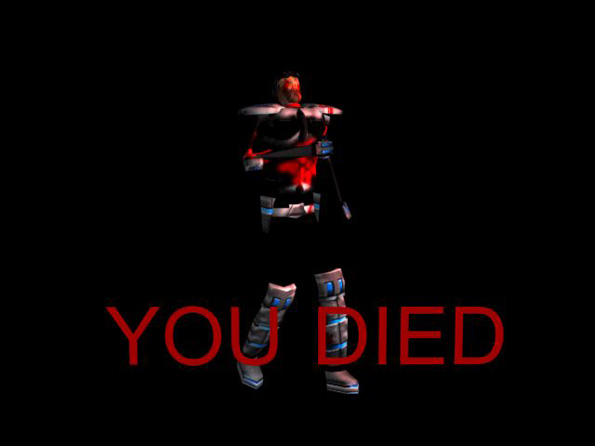 Fun fact: The people who made this game have apparently never heard of video compression. This horrible 'you died' clip is six seconds long with no sound, and it weighs in at 132MB. No, that is not a typo.

Your goal in this exciting single player demo is to lead your self threw a building full of demons and other things. By destroying all these demons you will have saved the lifes of many people. But be careful , this won't be an easy mission

Be warned that in its own highly retarded way, this introductory text is telling you the truth. This definitely will not be an easy mission, mostly because the “demons and other things” were smart enough to move into a small futuristic disco club with glowing walls, ensuring that any human being who entered would last about ten seconds before his eyeballs decided to give up and detonate. I’m guessing the guy who made this game was a raver, because only a lifelong addiction to esctasy could possibly make someone create a game that looks like someone swallowed a bucket full of rainbow chiclets and ran around puking on all the walls.

Additionally, you could probably get more responsive controls by plugging your mouse and keyboard into a washing machine. The game simply fails to understand any form of input you try to give, and the accompanying text file is an evil lying communist that tries to convince you that all the buttons in this game actually do what they’re supposed to do. Since I am such an upstanding truth-loving American who hates both demons and other things, I will translate the readme for you so you have some idea what to expect. For an idea of what pain level to expect, punch holes in your teeth with a hole puncher. 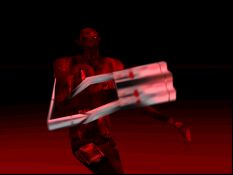 It's a tomato paste monster! RUN!

The readme says: W = To move forward
What it really does: Your guy will start clumsily stumbling forward while rapidly shaking his arms around in a vain attempt to block the massive amount of brightly-colored light rays being beamed into his skull. Occasionally, and for a reason that only exists in the damaged brain of the man who spawned this monstrosity, your character will appear to start stepping forward with only one foot while his gun spastically shakes up and down. Scientists were unable to explain this phenomenon, as every scientist who was exposed to this game ended up throwing a beaker of acid on the computer, or on themselves.

The readme says: s = To move backward
What it really does: It’s almost exactly like W (well, besides the unexplained shift to lowercase) only your guy will now make the same weird jerking motions while travelling backward. Unfortunately, moving any direction that isn’t sideways is certain death in this game, because for some reason it will cause any nearby enemy to unleash a deadly barrage of mangos or blobs of jello or whatever those weird orange things are supposed to be.

Bonus hint: Loading up a saved game will, 75% of the time, result in all four movement keys rebinding themselves to “do nothing.” You will be rooted to the spot with no recourse but to load up the game repeatedly until you are unstuck, at which point you will proabably fall through a wall and have to start over.