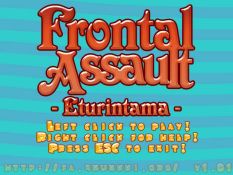 At a Glance: It is a well-known fact, at least among people familiar with freeware games and things that are retarded, that freeware games are retarded. Sure, there are some good ones out there, but the majority of them suck more ass than those vacuum toilets they have on the space shuttle. Now, normally I wouldn't claim any of these games are ripoffs, since they are free. However, I use Comcast High-Speed Internet, an ISP with an average of 20 minutes of uptime per day, so I can't afford to waste precious bandwidth on crappy freeware games that I could instead use to have deep and meaningful philosophical discussions with other intellectuals via Trillian. Frontal Assault, a horrifying example of the depths of shittitude that freeware games are capable of sinking to, is about smacking around a pair of breasts according to the pattern dictated by little icons that scroll across the screen. Either this is a product of the author's extremely fucked up childhood or it's a failed attempt at marketing Dance Dance Revolution to heterosexuals.

Publisher: Nobody, which is surprising since a game like this would probably sell in Japan.

The idea is to perform various moves on breasts. The move icons float to the screen and you must make the move before the icon disappears. Lose too many icons and the game ends.

For more information, read the help inside the game.

That brief description pretty much sums up the entire game. Essentially what it boils down to is a rhythm game without the rhythm. But instead of getting to watch something entertaining like a dog rapping about baking a cake with seafood, you get to look at what Mr. Sanisalo considers to be a good-looking woman, assuming "good-looking woman" means "popsicle stick statue glued to two weather balloons." The woman in question also has some serious health problems, since when one breast starts swinging back and forth the skin on her entire body starts rippling and stretching like a diseased mass of jello. The woman's face is off camera the entire time, presumably so the player doesn't see her asking why her breasts resemble two tent canvases filled with hot air, or why some guy is smacking them around while little icons periodically float down from the sky and disappear. 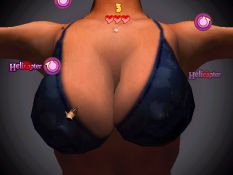 Please do not take the descriptions's advice and read the help inside the game. Attempting to read the help file by right-clicking at the title screen is one of many things that will make this game crash. Fortunately trying to read the help won't make the game COMPLETELY crash, it will simply pop up with an error message complaining about "DDHelp", at which point you can alt-tab out and back in to make the error message go away. Some other actions that make the game crash include clicking on things, hitting keys on the keyboard, and existing. Sometimes the game itself will fail to crash, but five seconds after closing it everything will lock up and force you to reboot. Now maybe I deserve some of this because I've been too lazy to upgrade from Windows ME, known worldwide as Windows 98's retarded cousin, but my XP-using friend had all of the same problems so XP can't be all that hot. Maybe I should install Linux instead, as that would make me inherently superior to all other life forms and make my cock grow to the size of a small fire truck.

As for the game itself, which I suppose I have to start talking about at some point, you score points by clearing "icons" that fall in from the top. These icons represent different "patterns" that you must smack the freaky mutant woman's breasts in, and if you do it right the icon will disappear. If you don't, the icon will keep falling until it hits some invisible line partway down the screen, at which point it will disappear and you will lose one point of health. There are three different funky moves you gotta make that bitch bust.

Helicopter: If you hit a breast in the lower-left or lower-right section it will do a sideways loop-the-loop and then flop around and squirm like an angry blubber monster trying to break free of its skin prison. This is by far the easiest of the three moves to do, unless you're trying to do it with both breasts at once. If you try something that foolish, the breasts will smack into each other and your weak little hand will take a good 5-10 seconds to get them moving again. Of course it's really not the hand's fault, since the poor guy has to deal with breasts so large that if he picked them both up and dropped them, the woman would lurch forward and fall on her face while her spine snaps and spinal discs go flying around the room like little white frisbees.