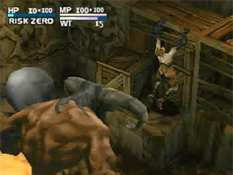 "Now squeal like a piggy!"The battle system lets you run around like a sissy ponce, but when the time comes to actually maybe hurt somebody, you have to turn it over to the menus. Vagrant Story covers new ground in anal retentiveness that even Final Fantasy 8 hadn't dared by letting you decide which region of the enemy's body to miss completely (and you'll miss quite often). For extra fun and detail the game includes a "risk" meter, which apparently measures how drunk off his ass your character is. Once the risk number gets above five he can't hit the broad side of a behemoth (and even if he did, it probably wouldn't do any damage).

Since I hated the fighting so much, I spent a lot of time going through my inventory. While flipping through the large collection of shoes Ashley was carrying around, I found that they too had individual "classes" and "affinities". By this point my mind had snapped and my only question is, "why didn't they go further?" What about traction?" If you're pushing crates around, you don't really give a shit if your shoes can withstand a Harsh Wind Spell; you just don't want to be sliding all over the fucking place like an ice skater on crystal meth.

And then there's the gorgeous weapon system. It's set up so that your weapon gets more powerful the more you use it, and when you get a new weapon it's a complete piece of shit. So what happens is you keep your old weapon that you have some experience with and just leave all the new weapons you find in your backpack or your ass, wherever you're keeping them. This system is taken directly from Secret of Evermore, which was developed by Square of America. When the real Square developers start ripping off the team that was started as a cruel Japanese joke, we're all surely fucked.

The presentation is reminiscent of MGS, which is a good thing, maybe the best thing, but it only goes as far as the visuals. Square continues to avoid voice acting with the same idiotic stubbornness that Nintendo avoided CDs with. The fact that the characters can move their mouths only accentuates the fact that absolutely nothing is coming out. The result is a mime show with word balloons. Great presentation but not a goddamn thing to present.

If you still want a Vagrant Story after reading this review, just go to any major city and give a street person a few bucks. They'll tell you whatever you want, and it will probably end up being a more enjoyable experience. If I don't get this basement cleaned out I might end up as one of them, but at least I won't have to play this game any more.