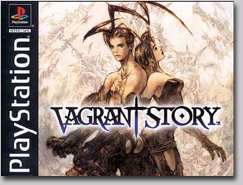 At a Glance: It looks like Metal Gear Solid meets Final Fantasy; it ends up being Boxxle meets Corky from "Life Goes On". 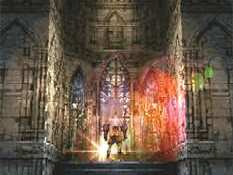 A lovely sunrise like this gets you in the mood to stack crates.

I've been cleaning out my dense basement these past few weeks so that I might have a place to live for the summer and possibly the rest of my life. While flinging around mouse carcasses in a plastic bag, the thought that kept me going was that somehow I'd be able to find and rent a copy of Vagrant Story. Oh yes, the legendary Square RPG... a beacon of light in my blackened childhood. I fondly remember for the days of short summon spells and girls with strange colored hair, when I could take my band of hearty travelers into untold regions of evil and blah blah blah etc etc. Actually, I had a terrible childhood that was somewhat less horrible when I was playing a Square RPG. All the breathlessly positive reviews said that Vagrant Story was the game that could help me forget I spent a month of my life furiously pounding buttons, waiting for those damn Guardian Forces to do their things. Every preview claimed it was like Metal Gear Solid, which was about the only game I've enjoyed in the last three fucking years. So while I shoveled moldy clothes into a bag and tried not to inhale dead mouse fumes, I pretended I was in front of the TV, exploring a vastly immense green overworld full of people, towns, castles, and forests.

Then one day I did find it; Hollywood Video's one copy was in at 5:00 on a Friday. That probably should have tipped me off that something was seriously wrong.

The first thing that should be mentioned is that the StC (Start to Crate) time for Vagrant Story is a mere 45 seconds, all 45 being load time. This went from unfortunate to downright appalling when I found out I was expected to actually stack the crates. I was allowed to take out my pent up frustration by breaking one crate with my sword, but mostly I was just simply supposed to pick them up and pile them someplace else. The crate "puzzles" center mainly around stacking the necessary number of crates on top of each other so the hero can get up someplace. Yes, what a fantastic idea of fun! The next indignity came when I had to track down and fight a nasty boss all for a key. A single fucking key.

After I was done scientifically calculating the StC time, I went back to watch the opening cinemas so I could find out what the hell was supposed to be going on. When I got back to the starting crate, I still had no idea. Apparently there are about ten different groups of people (Valendia Knights, Mullenkamp Sect, VKP, Parliament, Blades, Mafia, CIA, the phone company, QVC) fighting over some town or manor or something called Leo Monde. The guy you control is named Ashley Riot, who has a cool name and hair that makes no damn sense at all. The bad guy named Sydney is the leader of some evil religion, and I know it's evil because he doesn't mention Jesus once. 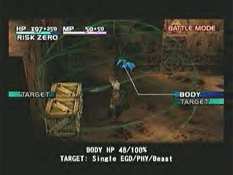 Here one picture you need to know about Vagrant Story: stats, bats, and boxes.

They're all shit out of luck though, because the place has already been taken over by the SoCM (Society of Clichéd Monsters), starting with dragons, bats and dogs, then moving on to skeletons and gelatinous blobs, and just when I thought the game had used up its supply of stock enemies, out popped the Lizardmen, and I was back in a world of Lizard hurting. True, it's a world I've been to a hundred different times in a hundred different games, but they always, always, always make the Lizardmen obnoxiously powerful.

At some point, between recognizing all the enemies and wrestling with the interface, I realized that, oh shit, I was back in the goddamn basement. Not my basement now, but Vagrant Story's. Sure, the dead mice were replaced by live bats and the moldy clothes were replaced by crates, but it was basically the same thing. My mind began twisting as I realized I had been waiting for weeks to play a goddamn dungeon crawler that I could essentially reenact in my own house.

This, the first wretched spawn of Final Fantasy 8's interface, is created by people from the anal-retentive school of RPGing. Not only do you "get" to micromanage every aspect of your weapons and armor, but the damn things actually change on you the more you use them. I remember the days when a sword made of ice beat a creature that was on fire, and shooting a fish with lightning would kill it faster than just hacking at it. Now I have to worry about the weapon's "affinity", and since different weapons have largely different effects on different enemies, I can only assume Square wants me to re-equip every time I fight a new enemy. If they seriously think I'm going to do that then they're as crazy as the critics who gave this piece of shit 9's and 10's. Fortunately it doesn't really matter if you have the right weapon or not because Ashley Riot hits like a girl. Nothing makes me feel more inadequate than managing to pull off a three hit combo that takes a devastating 8 HP from my opponent. Politely asking the monster to run into a wall would cause more damage. I play these games at least partly for escapism, and I don't want to be reminded that I'm barely strong enough to lift my Playstation controller.