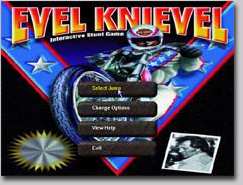 At a Glance: Valu-soft, the software production company who's motto is "Who cares, let's publish it anyway", comes up with another winner in Evel Knievel's 3D Stunt Game. This game has it all: repetitious competitions, characters with less polygons than your average cube, and an overwhelming sense that life is futile, nothing we do will ever matters, and we will all die alone and afraid. To top it off, I experienced all that within the first two minutes of playing this game. Special thanks to Mike Imboden who sent me this monstrosity. 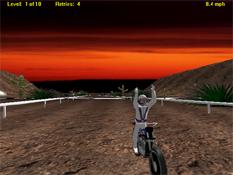 Before I start this review, let me get this out of the way: absolutely everything Valu-Soft makes is terrible. Everything. Without exception. They have never made a good game and they will never make a good game. Producing video game titles which people actually want to play does not fit into their business model, which consists solely of trying to see how many games each staff member can make while drinking quarts of Jaegermeister. Regardless of what title you purchase from Valu-Soft, you can be assured that the technology employed in it was used at least 20 years ago by software programmers in Bulgaria who originally wanted to make a game that would teach their children how to siphon water from nearby dirt and rocks. The "Valu" in "Valu-Soft" refers to the money their company saves by simply packaging and marketing games that computer engineering students made for the freshman "Intro to C++" courses. Valu-Soft's customer base consists 95% of confused grandparents who want to buy their grandson a PC game for his birthday but have no clue what game he would like. If you ever pick up a Valu-Soft title and find more than four minutes of quality playtime in it, chances are somebody slipped up and put the wrong CD into a Valu-Soft jewel case.

Now that's out of the way, onto the review!

Evel Knievel 3D Stunt Game is a tribute to Evel Knievel, a man who gained the title of being "America's Greatest Hero" by repeatedly doing intensely stupid things on his motorcycle. Long gone are the days when people were dubbed heroes for saving lives in wars they didn't want to fight, as the term "hero" now means "somebody who chooses to ride their bike over a bunch of parked limousines." Evel Knievel has performed a variety of patriotic and heroic stunts such as:

Apparently that constitutes being dubbed "an American Hero". The guy has broken almost every bone in his body, spent over 36 months in the hospital, and once fractured his skull so badly that he was unconscious for 29 days. I can't think of a better person to base a video game around! Well, anybody still living, that is.

Anyway, Evel Knievel 3D Stunt Game (yes, that's the title) attempts to recreate the thrill and exciting of seeing somebody fall off their motorcycle and nearly die. The game is tied in very closely to Mr. Knievel himself, as there's a black and white photo of him on the cover of the CD jacket. The motorcycle in the game has two wheels, much like Evel's bike, so you can tell the developers were really paying attention to detail. Just like Evel's thrilling performances, this game is broken up into five distinctly different events, all of which are exactly the same:

Wheely round - Player must master the incredibly complicated trick of doing a wheely (pressing the "up arrow" key) while driving forward. To make the game more complex, rocks and random debris are put in your pathway. You should avoid hitting them unless you enjoy seeing Evel Knievel get injured (you will).

Jump round - Ride your bike up one side of a ramp and land on the other side. This is a very tricky challenge, but can easily be accomplished once you actually plug in your keyboard.

Stand round - Just like the wheely round, except you're standing instead of doing a wheely. Creativity isn't a strong point at Valu-Soft. Neither is "putting on shoes without the assistance of somebody else."

Stand and wheely round - Combine the nonstop excitement of the "stand round" with the thrills and chills of the "wheely round" and what do you get? You guessed it!

Now I know what you're thinking: "Lowtax, with all these incredibly fascinating and varied types of exciting gameplay, how could this game be anything less than a digital orgasm?" Here's your answer, Chuckie: EVERY SINGLE GAME PLAY MODE IS EXACTLY THE SAME. The only difference is that one has a ramp and the other doesn't. Other than that, you will notice absolutely no change from one event to the next. Maybe it's excitement through painful repetition or perhaps the technology used in this game couldn't support the design doc's complex idea of "roads that curve to the left", I don't know.