The War in Heaven 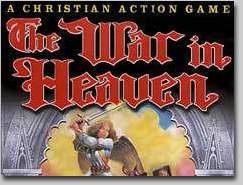 At a Glance: Based off true events that occurred in the author's mind after he took some very potent hallucinogens, "The War in Heaven" strives to teach the youth of today the difference between right and wrong. The game accomplishes this by making you throw rocks at gigantic Satanic toads. Running on an engine built "in house" by a group of particularly stupid grade school children, "The War In Heaven" will run laggy on even an 800 MHz system. However, if you have enough patience to sit through the 12-second long pause that occurs every time your character opens a door, you'll find a wealth of Biblical advice and lessons in this gem of a game. For example, you'll quickly learn that "a fool and his money are soon departed," and you just wasted a good 10 bucks on this game that you could've spent on chocolate-flavored toothpaste. 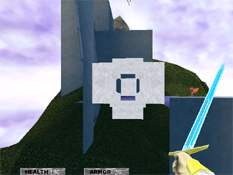 Mapmaking at its finest.

I'll be the first to admit I'm going to Hell. I've screwed up way too many times in the past to be under the false impression that I even have a chance to last longer than 18 seconds in Purgatory before they kick my scrawny white ass down into the bowels of the Underworld. I can think of 13 sins I've committed in the past hour alone, even more if "urinating into the water fountain" goes against the Word of the Lord. It was with this thought in mind that caused me to pick up a copy of "The War in Heaven" at the local computer store. I figured that I could use my world-famous FPS skills to ace this game, kicking daemon ass and getting a bit closer to heaven. I also thought that this would be a great way to "give something back" to Jesus, since he has given me so much already, including my microwave, jacket, and the new set of tires on my car. Oh yeah, the game was only $9.99, so that also figured into the equation.

I knew it was a bad sign when I went to purchase the game, and the undead dreg at the checkout counter picked up the game, looked at it, stared at me for a few seconds, and then remarked in a condescending voice, "The War In Heaven?" I assured him, in a confident tone, that I was perfectly sane and the credit card which I was using to buy this game actually belonged to me, and not a corpse floating around in the creek by the meat rendering plant. He seemed skeptical of both claims. Only after bringing this title home and playing it did I realize his reaction was justified. 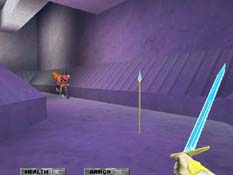 This is what some people call "weapon placement", but most others simply refer to as "the work of a severely sociopathic man".

The first thing you'll notice about "The War in Heaven" is the fact that the cover art is painted in the same style as the video game boxes from the mid-80's. After looking at the screenshots on the back, you'll realize that the cover art matches the time period when the game engine was initially designed, which (as far as I can tell) is based off the same engine which powered "Combat" for the Atari 2600. The publisher, "Valu-Soft" (note the fact that the value is so incredible that they can't even afford the "e" at the end of "value"), has put out some other various high quality games, most notably the smash hit title "Deer Hunt". Yes, you read that correctly. "Deer Hunt". We're dealing with a company that tries to ride the success of "Deer Hunter" with inferior knockoffs. If that's not just the biggest warning in the world, I really don't know what is.

"The War In Heaven" storyline (if you can find one) was written by Dr. Johnny Wilson, who I assume got his degree in something along the lines of "Social Dietary Study Philosophy" at Northeast Ringvaldia's Academy of Advanced Science and Writing and Smart Stuff. The "War in Heaven" webpage contains such intellectually stimulating quotes as the following: