Ted IS God (Thanks, William!)

Meet God! God decided to take a little vacay from Paradise and has reincarnated himself as a man named Ted Solomon More. Instead of rounding up a bunch of angels to spread his word, this time he's decided to go low-key and high-tech by updating his website, TedISGod.Org.

If you've ever wondered why there's so much suffering in the world, it's probably because God is too busy typing up scriptures and long, incoherent rants about Linux, Starbucks, search engines that try to cache his COPYRIGHTED "INTERNET Site Pages," his diabetes, and the hassle of designing websites for multiple display resolutions to do anything about it:

Therefore THIS SEEMS NOW Ted DOING INTERNET Sites For 9" Displays er Screens therefore Allowing Too Some For Frame and Scroll Bar(s) and Other Things On Side(s) and this Where INTERNET Site Browsers and Explorers and Navigaters and Other Things Called Vary! Ted WOULD LIKE A Decrease and Increase Of Magnification in FireFox and this SIMILAR to NOW Apache Open Office of 3.4.1 a Status Bar Of Things then there To Lower Right and this NOW to HOW SOON POSSIBLY WITHOUT VIOLATING Software Patents and er CopyRights and er even Open Source Code Licensing and Licenses and What Are Licensed of Open Source er Open Source Code enough to be a problem.

Dude created all of existence in six days and now he can't add a status bar to Firefox? Oh, how the mighty have fallen. 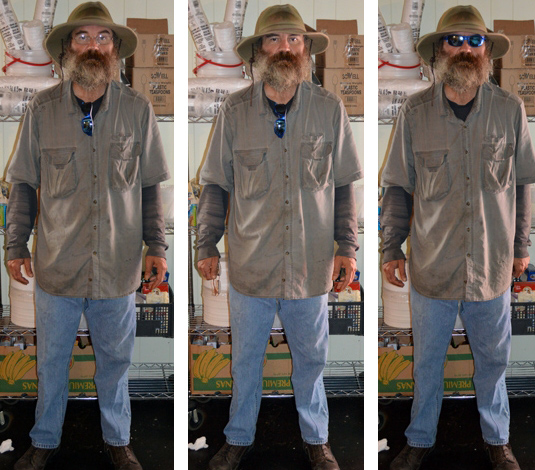 Ted is a benevolent God, though. He'd like it if you just did a few things for him: adore him, love him, like him, praise him, maybe help him start up a few churches. Oh, and also he would really appreciate it if you could "NUKE ALL OF SAN FRANCISCO, CALIFORNIA, USA TO SHOW Ted ENOUGH MERCY AND MANY OTHERS MERCY AND MERCY!" You know, when you get a chance. In return, he'll give you some credit loaded into your KingDom of Ted of Heaven Control Card (roughly equivalent to "1000 TRILLION OF USD er U.S. DOLLARS"), which you can use towards salvation or "Saving To Heaven." Better hop on the Ted Train before it's too late! 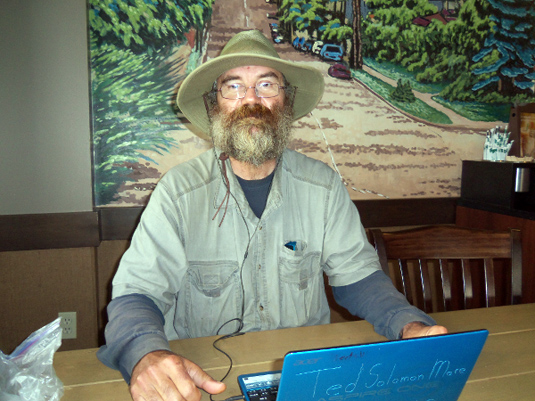 One of Ted's biggest People Human Male rivals is a guy named Robert Fisher, who claimed to be a prophet of God and Jesus Christ (what a nutcase!). Not only was Fisher "HOSTILE to HATEFUL" to poor ol' Ted, but also he took some candid photos of him, which is the worst thing ever:

Then Next Day after Running Into WHERE Ted HAPPENS TO BE Where Was Eating and then at a Public Park then QUOTE RAN INTO Ted AGAIN IN a HUGE LIBRARY TO POINT WAS LOOKING AT Ted's there Computer Set Up and Things where Ted TOLD I NEED SOME PHOTOS OF YOU NOW and RELUCTANTLY agreed POSSIBLY NOT to look TOO SUSPICIOUS IF DECLINED to REFUSED to WAS HOSTILE ABOUT IT!

Another rival is Satanist and Red Hat employee Andy Sachs, who somehow convinced Ted's ex-wife to poison his food and drinks, causing him to have "SEVERE to WORST RUNS to DIARRHAS to SHITS and Other Things." These guys are ruthless.

It's no wonder Ted is so paranoid. He warns his followers that he and his site might might suddenly vanish. With all those people out to get him, he "NEEDS TO FLEE AND HIDE AND BE HOW SECRETIVE ABOUT IT" (naturally, his site contains a lot of selfies and photos of his ex-wife and what I assume are his children). Unfortunately, Ted is "HAVING WORST SECURITY PROBLEMS CURRENTLY NOW" because he no longer has an arsenal:

Ted During 1990s WAS HAVING a 3 STORY HOUSE with a LOWER GARAGE WITH FULL PERIMITER ALARM and OTHER THINGS OF SECURITY WHERE Ted's MASTER BEDROOM WAS ON TOP FLOOR and this WITH A DOOR LOCK and ALARM KEYPAD IN MASTER BEDROOM WHERE THERE Ted HAS ENOUGH GUNS and WEAPONS and AMMUNITION and MAXIMUM BULLET PROOF VEST WITH MAXIMUM CARDIAC PLATES and OTHER THINGS TO PROTECT Ted and WHO and er WHAT Ted WAS PROTECTING IN HOME! Ted NOW NEEDS TO POUND TO DEATH WHAT DID MANY THINGS TO WHAT WERE THEN TOTALLY TURNED PSYHO Andy Sacks of Sachs, Savage and Noble and Richard Nickoley and Others Of a Down of Those Satanist and Mafia and Other Things!

(scary Batman voice) BEWARE, CRIMINALS. I WILL POUND YOU TO DEATH.

In addition to his God duties, Ted is also an aspiring filmmaker. He's uploaded some of his videos in "DL4" format that you have to download and then change the filetype to "mp4," which I guess is to throw people off the tracks? One of them is an announcement for a documentary called "HomeLess!", which you can also see on YouTube. The credits literally comprise more than half of the 13-minute video and, surprise, Ted is the only person credited. The rest is mostly footage of people telling him to put his camera away. We can all look forward to Ted thanking himself when he accepts his Oscar.