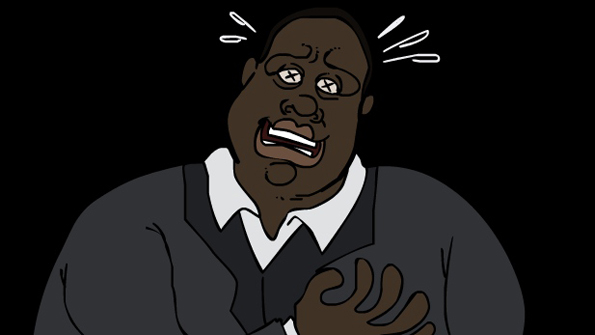 On March 9, after leaving a nightclub in Los Angeles, the Notorious B.I.G. was shot A LOT of times. He and his entourage were just cruising in their vehicle, nonchalantly joking and telling ghost stories, when they heard several very loud gun blasts. The vehicle's windows were instantly shattered, and its tires were torn completely off the rims.

Ostensibly, no one was hit. And they began to assume a late-night Chinese New Year celebration had gone awry and completely obliterated their vehicle. B.I.G. turned to the back-seat members of his entourage and said "I can always get another vehicle. I'm a little upset that we are sitting here stuck on the road and have to get a taxi or something, but oh well. I think Chinese New Year is quite important, and we shouldn't be upset about it. That's the only explanation I can think of." His entourage agreed. They all decided they would get out of the vehicle and walk to Roscoe's for a bite to eat while they waited for a car service.

However, right before he opened the car door, B.I.G. looked down at his sweater and realized he had been hit with 11 bullets. He exclaimed, between bouts of hysterical laughter: "MY BANANA REPUBLIC SEXTUPLE EXTRA LARGE SHIRT HAS 11 BULLETS IN IT. I'M BLEEDING PROFUSELY. HAHA. I DIDN'T EVEN FEEL THE FUCKING THINGS. DO YOU REALIZE WHAT JUST HAPPENED? I WAS SHOT 11 TIMES BY ASSASSINS WITH A VENDETTA, AND ALL THE MACARONI AND CHEESE I ATE LAST NIGHT AT THAT LAS VEGAS BUFFET MADE ME UNABLE TO FEEL IT. HAHAHAHA." He began, along with his entourage, to laugh harder than ANYONE has EVER laughed before. Nothing was funnier to him than the fact that he assumed this was just a Chinese New Year celebration that had taken a turn for the worse. "Man, what's funny is Chinese New Year was last month," his backseat weed-carrier stated. This made Notorious B.I.G. start laughing even harder than he already was laughing. In fact, he laughed so hard that his lungs began to labor due to oxygen debt. He simply could not muster up the strength to stop laughing.

Unfortunately, before he could gasp for air to further fuel his laughter, he went into cardiac arrest and instantly died. This sent shock waves through the hip-hop community, and for years rappers have hoped being shot would brand them with the same credibility enjoyed by the Notorious B.I.G. However, he didn't die from being shot. He died because some really funny shit happened. You had to be there.

They are hiding in Denny's kitchens, cooking Meat Lover's skillets at 6 a.m. for us sophisticated drunk folk. Not the fratty type. I mean us... the sophisticates! Anyways; they take OxyContin and drink Mountain Dew for breakfast. They inject meth with needles borrowed from their friends, who say things like, "Bro, it's cool. My blood is clean." They know good and goddamned well that people in The Congo have very difficult lives... well, maybe they don't. But they should know this. And if they do, or did, they still claim their childhoods were very hard and fucked up. ("My dad left my mom for another woman. He's a big asshole. He won't even pay my cellphone bill unless I promise to help him paint his picket fence in his backyard.") You know who I'm talking about yet? Fine, let's keep going.

They smoke Marlboro Reds, they play video games all day, they have very long hair, with the undersides shaved. They don't clip their nails; they wear the same pair of black éS skateboarding shoes as everyone else in their clan; they have strange piercings in their faces, ears, septums, lips, cheeks, eyebrows, cocks, nipples and any other anatomical destination you can imagine. And worst of all: THEY WEAR JNCO JEANS. Of course, they didn't all have a hive to hide in. At one point, Evanescence was still working the club circuit in Arkansas (yes, Evanescence is from Arkansas), and didn't have a sprawl of millions supporting them. However, Evanescence took off, and JNCO Jeans suddenly exploded... again. Fuck man, Tony needed a new pair of JNCOs to wear on his date with Toni. Please, you know at least once in history, a guy named Tony took a girl named Toni on a date to an Evanescence concert.

In 2006, an artist by the name of T-Pain remolded the signature vocal approach of 1970s super-funk act Zapp & Roger. While Zapp & Roger was very self-aware, in the sense that when you listened to them it was obvious that they were singing through a computerized synthesizer, T-Pain employed what is known as Auto-Tune. This software technology, developed by Antares Inc., could automatically correct the pitch and key of a singer's voice. When used to an egregious degree, auto-tune could make the vocalist sound like a cyborg. Almost invariably, the song being sung would be about either A. Strippers B. Ordering dranks C. Getting naked or D. Geomagnetic Pole Reversal.

A majority of radio songs became infected by this new technology. And over the course of the next twenty years, it became standard protocol to use this technology when creating music. When the Nazi Vegan Media Party of 2015 overthrew the U.S. government and established a unified singular government system for the entire world, ALL music from the past 50,000 years was apprehended and destroyed. From then on, musicians and vocalists were merely employees of the government who were trained in school to use remedial vocal techniques and to sing about the four acceptable topics: A. Strippers B. Ordering dranks C. Getting naked or D. Geomagnetic Pole Reversal. Then, auto-tune was applied to the songs.

Music was now treated as a mildly therapeutic byproduct of the Nazi Vegan Media Party, or, The New Right. Over time, all individual thought was demolished, and people were assigned jobs and chores when they were children based on their physical structures and eye color. After thousands of years, the most predictable and widely enjoyed archetypes prevailed, and a metamorphosis took place. Music, while desired out of inherent hunger, was not demanded to contain any unique or special qualities. So the New Right selected three fundamental genres of music: rock, rap and country, and, per region, employed one artist. These artists did not have their own identities or aliases, but instead were simply referred to as: Rock Artist, Rap Artist and Country Artist. They made one song per day, which would be played on the loudspeakers at each work camp and township. And the songs never strayed from the four acceptable topics, though at this point, these topics and their meanings were completely lost on the human race.

At times, though, certain workers would have a natural urge to belt out a note and sing a melody (perhaps passed down to them genetically through their musically inclined ancestors). This was considered completely unacceptable, even pornographic, and it was punishable by torture and death. Similar to clothing, auto-tune became the new method of protecting the senses of other people from that with which we were naturally born.

Whitney Houston died in her sleep on Christmas Eve 5899. She spent the last 3,800 years of her life clearly under the influence of opiates, methamphetamine, and benzodiazepines. She was living in the Rock and Roll Hall of Fame, which was now located underwater, and only a limited amount of people even knew of its existence. Legend has it that Whitney Houston inhaled so much crack cocaine during her life that it evolved her lungs into that of a genetically enhanced human/submarine hybrid. RIP.

143.420 a.d. MUSIC IS REDISCOVERED IN THE FORM OF AN ANCIENT CREED CD. MUSIC DIES SAME DAY.

The New Right tumbled. A most hideous Götterdämmerung collapsed the world tyranny, and villages of tribes began to form in the aftermath. People spoke in grunts and whistles, clicks and pops. Words no longer existed. The New Right had obliterated all formal knowledge of art, entertainment, and humanity.

On a sunny spring morning, a nameless pauper boy was walking through the woods of Northern California looking to gather firewood for his tribe. Out of strange curiosity, he decided to open the door of a very old LeBaron from 1998. He had no idea what this device was, but because it's only 2010 and none of this story is actually true, I will just tell you that it was a car. He turned the key in the ignition and the first thing he heard blaring out of the speakers was:

"Well I just heard the news today
It seems my life is going to change
I closed my eyes, begin to pray
Then tears of joy stream down my face"

He immediately turned the key so the horrid sound would stop. Perhaps if Animal Collective were in the CD player, music would have been reinvigorated and society would have been saved. But, as we all know, nothing is better than kicking an injured man while he's down. So I will end this by saying: FUCK CREED, THEY DESTROYED MUSIC. INSULTING CREED WILL NEVER GET OLD, EVEN THOUSANDS OF YEARS IN THE FUCKING FUTURE. AGAIN, FUCK CREED. THE UNIVERSE IS DOOMED.

Mac Lethal's music can be found here. Thanks to Shmorky for the illustrations!