Meet Jason "Turd" Ferguson. You may think you know more about music than he does, but you're wrong; you just know more about shitty music that he doesn't care about. Read more of his writing at Notable Noise.

I used to work with a guy who unilaterally and preemptively hated every piece of music made after 1977. There were grandfather exceptions made for the likes of free jazz musicians and members of the Rock in Opposition movement, but only because their roots were deeply entwined in the post-hippie prog-rock meltdown that this pot-smoking grouch determined to be the very definition of underground culture. Proggy, quirky, unnecessarily complex? Excellent. Obscure, but lavishly worshipped by a small, culty group of people? Even better. Loathed by a larger, but equally vehement group? The best.

This guy had pretty good taste in music, but it was so hilariously circumscribed that whenever a record with a relatively recent vintage was blessed with his begrudged approval, two things were certain: 1) the record was gonna be high quality, and 2) the record was gonna be incredibly divisive. Now, I haven't spoken to this dude in years, but I guarantee you that the new 3-CD set from Joanna Newsom would be right up his alley, sound-wise. But it certainly would not have met with his approval; Have One On Me has proven far too broadly successful - 7,000 copies sold on day of release and uniform praise from The New York Times on down - for that to be the case.

No, instead it would have been a phenomenally easy target for him to barrage with buckets of resin-soaked opprobrium. The album itself would have inspired a handful of dismissive adjectives - "cheesy," "dull," "predictable" - and, with a tightening of his ponytail, he'd deliver a quick litany of far superior albums that came out 35 years ago from a collective of musicians in southern Yugoslavia that explored the same sonic territory.

And with that, Joanna Newsom would be dispatched as another unworthy pretender to the art-rock throne. This guy was an expert at this shit. Every time you'd bring him something you thought he'd enjoy, he'd make you feel like a third-grader showing his uncle an ashtray you made in art class, and then your uncle turned out to be a stoned prick with a superiority complex and a need to show off what he picked up in that semester of art history back in '72. 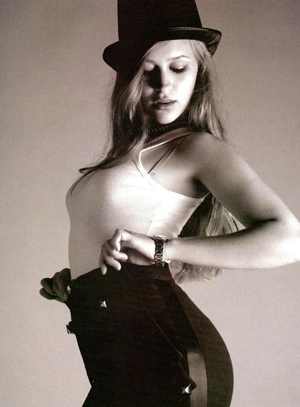 But... BUT, the thing about Joanna Newsom is that, really, you would be right to think that our esoterica-craving curmudgeon would be all about this album -- were it not given the patina of "indie rock" or the stamp-of-authority from scores of generally mindless bloggers. This 3-disc monstrosity of pretentious puffery is exactly the kind of stuff that sanctimonious, more-obscure-than-thou blowhards like that guy live and breathe for.

Remember that "uniform praise from The New York Times on down"? Do you know anyone besides self-righteous music nerds who actually praises music with "handclaps, furtive blares of electric guitar and a strange Eastern origami coda that neatly folds a bit of Japan into a bit of Bulgaria" (The Guardian's Kitty Empire) or delight in a cut that "muses on the international intrigues and inner desires of the 19th-century courtesan Lola Montez, [and] runs 11 minutes" (Jon Pareles in The New York Times)? Of course not. But holy shit, did the music critic elite line up in lockstep to praise Have One On Me. Current Metacritic rating: 85 (which is amazing, considering that even the worst review - a 40 from PopMatters - hedges its bet with a weasely "there's a decent album hidden somewhere in there.") 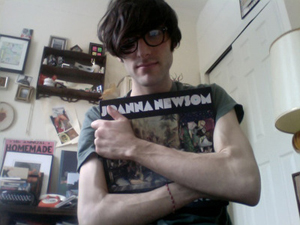 It's not just critics, either. There are huge swaths of music fans - people who actually walk into stores and buy records - who went apeshit for this thing. Seriously, this is a real Web site: People Hugging the New Joanna Newsom Album. But you know what's even worse than this outpouring of love for a deliberately strange and annoying record? The people who go out of their way to point out that Joanna Newsom makes strange and annoying records.

One expects a few dudes (and yes, they're all gonna be dudes) like my former co-worker to dismiss Newsom as being not strange or annoying enough, and I get that. And, to be honest, I also get the people who are losing their goddamned minds over their passion for this San Francisco kook and her harp. But what is completely unfathomable are people dense enough to complain that she's gone and released an album of harp/squeaks/madrigals and, holy shit, it's annoying and strange and not really fun to listen to.